I started with the Instructable from Kyle Brinckerhoff;

and the following at Make magazine
http://blog.makezine.com/archive/2007/08/arduino-pong.html

and I see the original code is attributed to Pete Lamonica

I am using the paddles instead of the joy stick and I have made it for 2 players. Also I added some sound.

I put the electronics in an Iphone box . 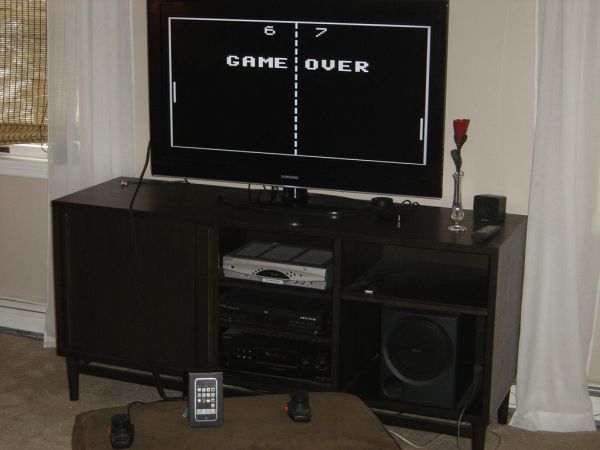 Step 1: Video of the game

I used the following:

Iphone box
Arduino – I had a Freeduino from Solarbotics that I used.   The picture shows another but I am sure others would work fine.
Atari paddles – I had from an old system being stored in the basement.  I see them on eBay.
An old RCA cord that was in my big box of misc cords
A 9 pin D connector that I got at Radio Shack – pn 276-1538
Also (not shown)
RCA plugs for the cable to attach to – had in my pile of broken things
resistors
75 ohm
1Kohm
330 ohm
2 10k ohm pull down resistors

I started with a small piece of wood which I cut to fit inside the box.   The idea was I would secure everything to this piece and then secure the box to the wood.   Holes need to be cut to fit the RCA plugs, the 9 pin connector, and for a USB cable which is needed to attach to Arduino .

I glued another small piece of wood to the larger to be used as a place to secure the Arduino.

Following the instructions from Kyle’s Instructable, I soldier a 1k ohm and a 330 ohm resistor to the center pin of the video out RCA jack.
I also connected the 75 ohm that is shown in the diagram . It made the picture a little less bright but much clearer and it stopped a lot of the flickering.

The RCA plug for the sound is straight forward: The center plug goes to Arduino pin 11 and the ground side goes to ground.

The bottom part of the diagram is different than what I did. 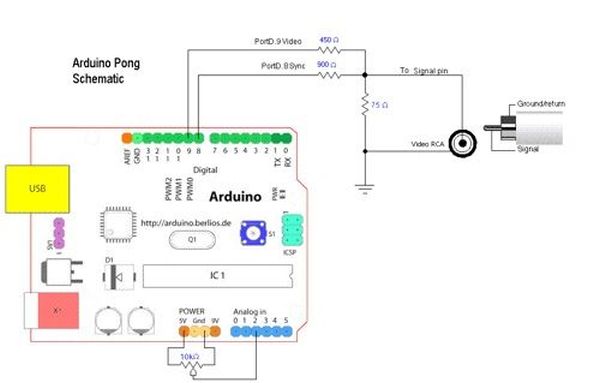 How to effectively handle human-machine interface in your applications?

Did you miss our webinar? Watch the VIDEO – record... With the Bolymin graphic embedded module it´s possible to focus...