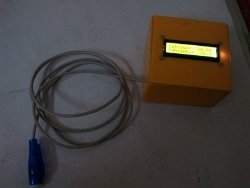 Temperature is the most frequently measured physical quantity, second only to time. Our idea is to make a non contact digital thermometer which is much faster than contact thermometers and also facilates measurements of temperature of moving objects. In this as there is no interface, no energy is lost by the object while measuring the temperature.

The project has been divided into 3 parts:

The most basic design that we are thinking of consists of a sensor to transmit the infrared thermal radiation on a detector, which converts the radiant power to an electrical signal that can be displayed in units of temperature after being compensated for ambient temperature on the LCD screen. This configuration facilitates temperature measurement from a distance without contact with the object to be measured. We are thinking to use MLX90614 sensor. It is an Infrared sensor for non contact temperature measurements. Both the IR sensitive thermopile detector chip and the signal conditioning ASIC are integrated in the same TO-39 can. Integrated into the MLX90614 are a low noise amplifier, 17-bit ADC and powerful DSP unit thus achieving high accuracy and resolution of the thermometer.