I came across these Force Sensitive Resistors. I like them a lot and I wanted to do something with them, may be making them more usesable than standing on the breadboard.

Few months ago, I created the pocket-sized  RevIO – Arduino Compatible and having fun with it since then.
While playing with these two, I decided to put them together!

To complicate things further, I wanted to use them wirelessly. So I added XBee module to send commands wirelessly from RevIO to play different drum sound snippets on the PC speakers.

This instructable only shows how to use these FSRs to make drum sounds as they are pressed. 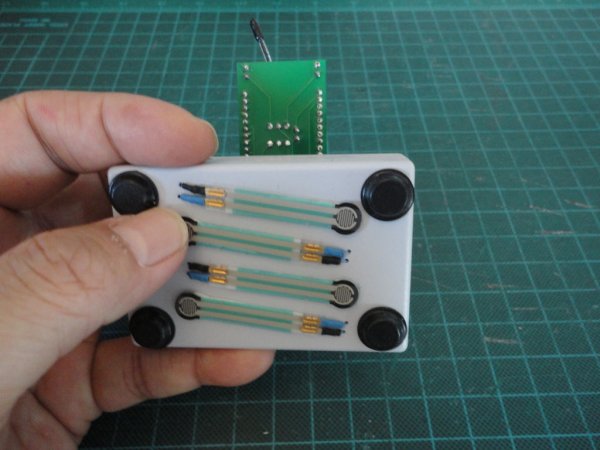 The most suitable places for the sensors is on the back of the case of RevIO.
If you are going to make this project happen. And you are using any Arduino or compatible. You will need to have some sort of surface to place the force sensitive sensors on.

For the placements, I want to place the two FSRs on top row another two on the bottom row.
And each pair, top and bottom pair, should stay on the same horizontal line.
The result is shown in picture 1 below.

Then I transfered the layout on to the surface of the case.

When we are dealing with these sensors:

It really hard to solder their leads to PCB. Because  these sensors made out of plastic, and they melt easily.

The following instructable shows how to solve the problem :
http://www.instructables.com/id/Cheapest-Wire-Wrapping-Tool/

RevIO or any Arduino compatible board
(Note: If you are using any Arduino or compatible. You will need to have some sort of surface to place the force sensitive sensors on)