Transistors- The 70-year-old invention that changed the world

Its been 70 years since the fundamental building block of electronics was created, and it has been getting smaller, and better since then. The invention that won the Nobel prize for John Bardeen, Walter Brattain, and William Shockley in 1956 revolutionized electronics and made it into the IEEE milestone list. Before 1947 computers used vacuum tubes, which could be several inches long, consumed massive amounts of power, and needed to be regularly replaced. Nowadays, billions of transistors can fit in the area of a single vacuum tube, can last for many years and are a lot more efficient. 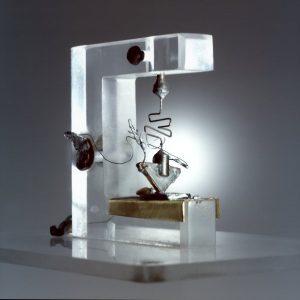 What is a transistor? For computing, basic binary logic operations are needed in order to perform calculations, so the objective of both vacuum tubes and transistors was to toggle the device between on and off position (1 or 0). A transistor is made from semiconductor material (usually silicon or germanium) capable of carrying current and regulating its flow. The semiconductor is doped which results in a material that either has extra electrons (n type) or has holes in the crystal structure (p type), and the transistor is made from a combination (layers) of both of these types. When current is applied, electrons can go through the different layers allowing energy to flow. Transistors can work as a switch or an amplifier depending on how it’s configured.

In 1965, the intel co-founder formulated Moore´s Law which states that every 2 years the number of transistors in a dense integrated circuit doubles. Since then Gordon E. Moore has been right, but soon the law will no longer be true which will lead to either a slowdown in technologic advancement or a new golden era for engineering where a new technology will replace transistors and a race to make it better and more efficient will again begin.

READ  Keep the WiFi On

Read more: Transistors- The 70-year-old invention that changed the world

TIME SYNC THROUGH YOUR VGA CONNECTOR

While it might be in its twilight years, the venerable VGA video connector conceals a versatile interface that  can still...