This robot will mow the grass of your garden, staying within a defined area, avoiding all obstacles and working in complete autonomy, automatically charging itself with a solar panel. 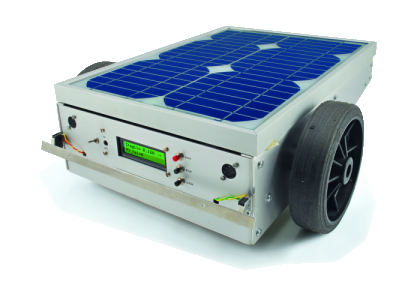 In this post we present a robotic lawn mower, powered with solar energy and able to operate just with the clean energy from the sun; this one is a great difference from the commercial projects having a robot in need of a charging station connected to the electrical grid. When designing a lawn mower powered by solar energy, it is essential that most of the energy comes from the sun, and of course the ultimate result would be obtained if solar energy were enough to completely power up the robot: this one is however an objective that will be very difficult to obtain, given the low efficiency of existing solar panels. In our project the whole surface of the robot is destined to solar panels, acting also as a cover: only the sides have been left free, and anyway they wouldn’t play a decisive role in supplying energy. Obviously, this choice poses a serious constraint to the rest of the project, since in this way we already defined the maximum power available.

We have to consider that solar power will not always be available, as many garden areas are often in shade, or anyway not directly hit by the sun, so we have to take into account considerable losses of power. These losses can be made up only if the robot has an accumulator capable of supplying energy when it is lacking from the sun. In this situation the battery works as a buffer, accumulating energy when it is plenty, and supplying it when the robot, on the contrary, is in shade. From this point of view lead batteries are the most suitable ones, but nothing forbids us to use batteries that can be performing more in terms of weight and capacity, like lithium ones. In full sun, the solar panel is capable of recharging the internal battery with a current at about 0,6A, totalling about 8W, well under the power used by even the most efficient electric lawn mower, powered at 220Vac. This makes us understand already that a product like the one we’re describing in these pages cannot substitute a manually operated lawn mower completely, as this last one should be used every now and then, when the grass is too tall. Rather, the robotic lawn mower can be used for a continuous and steady mowing of the lawn.

This solution also offers a further advantage, since the continuous mowing ensures that the grass is always young and soft, and as it is cut in very small pieces it is due to decompose itself in a short time, thus serving as fertilization for the lawn. You shouldn’t expect the grass that has been cut to be gathered: on the contrary, it will deposit itself among the grass blades that have just been cut.

For this kind of usage, less power is needed, and can be easily managed with a battery powered system. The weak power in play convinced us to choose a traction and a cutting engine with reduced power. Probably, they might not completely suit the needs of our readers, who may anyway pick up the engines and the structure they prefer, depending on their budget and personal exigencies. To define the cutting zones in a lawn, the underground wiring system proves to be at the same time simple, accurate and reliable. It is also the best system to define the work area of the robot. 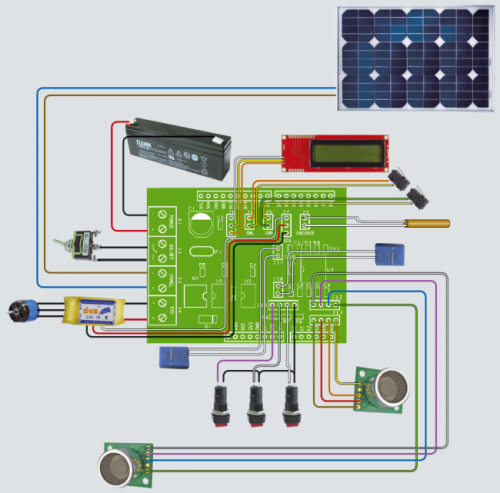 Everything is based on the usage of a simple electric wire, laid on the ground or a bit under it, and connected to a control unit powering the wire itself with an alternating electric signal at about 10 V and a frequency of 34KHz. In the lower part of the chassis of the robot two small reels are installed, one on the right side, the other on the left side, both referring to an electric circuit formed by a capacitor in parallel. The circuit formed by the parallel inductance and the capacitor is called parallel resonating circuit and is calculated so that the tension at its ends, induced by the external magnetic field, is at a maximum when the magnetic field varies with a frequency of 34KHz.

For more detail: A Robotic lawn mower powered by Solar Energy with an Arduino heart