[4.1/ switches / characters]
The characters on top of the moving platform function, as interfaces, actually as on-off switches. While standing in its position on the platform that keep a switch on. Once they are knocked off the switch is off. The characters are built once again with 3mm laser cut MDF, and made of a circular platform, connectors and a silhoutte. On top of the silhouette and color printed collage is glued to make the figures attractive and, if so desired, recognizable.

This is achieved setting two electrodes on the surface of the moving platform that are connected by a continuous conductive surface when the figures are on top of them. The material solution of it was using flexible self-adhesive copper film for both ends of the switch, taking care to have it as perfectly flashed on the surface as possible. On the lower side of the platform a cable is soldered to each of the electrodes connecting to the I/O board.

A secondary problem was to keep the characters reasonably in place while the platform is moving left to right and back. This is achieved using small neodimio magnets that are embedded in the precisely cut MDF pieces. It was important to finely regulate the distance between magnets not to make the figures impossible to knock off with the light balls to be used in the game. Once determined the distance, the magnets were fixed in its place with some drops of Loctite glue. 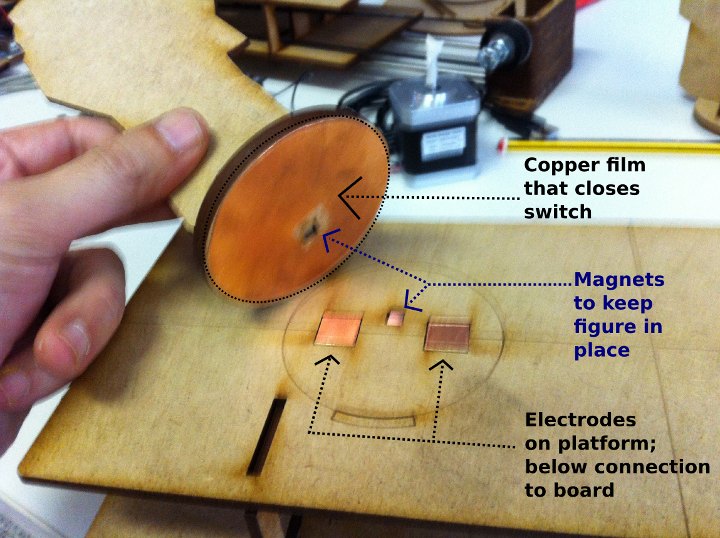 The figues still move a bit, and in a future version, two pairs of magnets could be used for each of the figures to achieve a more stable configuration.

The electrodes are made enveloping MDF pieces with the right dimensions in flexible copper film, so that the contact can be made on the top of the platform and cables can be soldered in the lower part. The neodimio magnets that we had in the lab from other projects need to be adjusted to find the right strength for the figures, so that they stay in place when the platform moves but that they can be knocked down with a softball. Some testing were made with the platform in movement to make sure the electrical connection was stable. Once the position of the electrodes and the magnets were fixed i used some Loctite glue to keep them in the exact place.

[4.2/ screen interface]
As advanced before, after considering various alternatives such using an LCD screen or a Python+Tkinter interface on a computer screen, a quite low tech and efficient design was finally chosen for the interface.

It consists on a white translucent acrylic, etched and equipped with various colored LEDs, as well as two functional switches [actually an on-off switch and a push button]. Two other push buttons are placed in the interface, but ended up having no function, and just looking cool 🙂 _ The LEDs inserted in the translucent acrylic glow in a attractive and quite visible fashion.

The system works as follows: The on-off switch connects and disconnects the system. The first time it is turned on two parallel routines [motor and timer+score] get triggered lasting for approximately 30 seconds. For the next iteration the player can press the push button that triggers the routines every time it is pressed. To turn the system off, the player presses the on-off switch.

The whole system is powered by a 12V battery, giving it an autonomy of several hours.

[4.3/ motor controller]
The stepper motor is controlled by an Arduino Uno and an ad hoc designed and fabricated simple board that houses a Pololu / Allegro A4988 mini board, – “A4988 Stepper Motor Driver Carrier” [http://www.pololu.com/catalog/product/1182] -, a 100uF capacitor and a set of connectors for 12V and 5V power + the four bipolar motor cables + the three connections to an Arduino Uno.

A schematic design was made with Inkscape, and then turned into the actual circuit design and milling files for the iModela with Rhinoceros; the file exported to the iModela, eventually was an “.ai”, an Adobe Illustrator file, that can be generated from Rhino [see images and links to files below].

The board was milled with the iModela, using a 4mm [1/64″] end mill – eventually! – that we were able to use thanks to a special adaptor/connector supplied by Roland Spain at the Fab Lab Iberia founding meeting in Barcelona. Compared to the 45º mills we had been using all through the academy the results using the 4mm end mill were extremely good. The board combines smd [capacitor] with through hole components [connectors].

The intelligence, as mentioned, is run by an Arduino Uno. We tried to make it with our own fabricated Arduino, but after trying four times in the lab with hello Arduino and Fab Kit 2.0 we didn’t manage to make it work yet.

A laser cut and etched 3mm MDF platform supports and gives stability to both boards. Both of boards are powered by the 12V battery – connecting to the Arduino through its own connector that i soldered too. The Arduino powered with 12V, regulates its own voltage, and provides the second board with 5V, through the 5V (and GND) pins. This allows for a single power source for all the system,- it is used to power a second Arduino in charge of the I/O system, too.

The system has been designed following the instructions in the Pololu web page and data sheet, as well as Igna94Igna’s, a local young colleague, online instructions [and code].

Above the connection diagram provided by Pololu for the Allegro A4988 motor controller “step-stick”.

And this one is my adaptation of the Pololu / Allegro diagram [http://www.pololu.com/catalog/product/1182] to be used in my configuration with Arduino and a Nema17 Wantai bipolar stepper motor supplied by reprapworld.com [http://reprap.org/wiki/NEMA_17_Stepper_motor] – that i had used before for the Reprap Prusa i2 that we made in former classes during the Academy. A larger version of the above image can be seen using “view image” in Mozilla / Chromium. The additional connections and the recommended 100uF capacitor, plus the A4988 are set in a “shield” as seen in the following drawings and images. 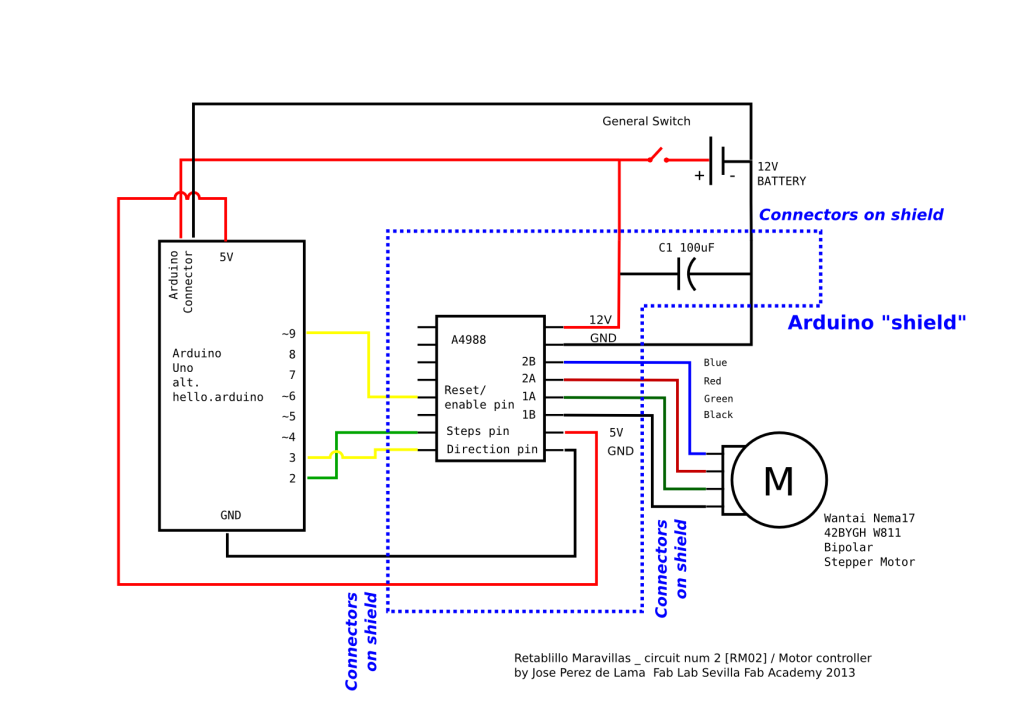 Milling was a slow process. Eventually i was able to mill with a 1/64″ end mill – instead of the 45º that we had been using up to now – thanks to a special connector provided by Roland Iberia, and some mills sent to us by Nuria from Fab Lab Leon – thanks! -. The first board milled with the end mill came out perfect… But… I hadn’t realize that because i was using through hole technique for some of the components, i should had milled it upside down… Before, in the first board i had made minor mistakes, while in the third board some tracks didn’t come out well; so i ended up milling at least four boards until i got a truly great one… Here are some pics of the process: