In our living room we have a small patch of drop ceiling right in the middle of the room, basically a giant piece of duct tape to cover up bad carpentry. It was constantly getting water damage from what looks like a giant hole in the ceiling above the drop tiles. After roughly a year of living in the house I decided to take action. The Pixel Drop Ceiling was born.

The Pixel Drop Ceiling is a Bluetooth, Arduino powered, Computer controlled, RGB, Drop Ceiling. The perks of being controlled by the computer are that the whole system is music controlled and its easy to change and create your own patterns with little software know-how. You can then change these patterns on the fly without having to upload new software to the Arduino, allowing you to create your own “show” in essence. 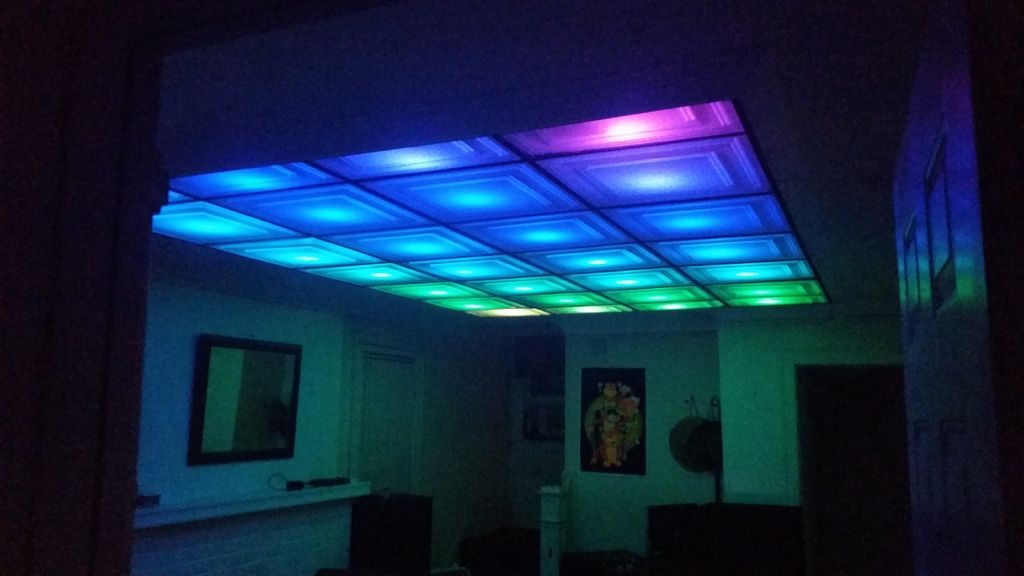 When choosing Ceiling Tiles you don’t have to go with the Stratford that’s simply what I chose, just make sure that no matter what design of tile you get that you buy the translucent tiles, NOT the white tiles. The Translucent tiles are made purposely to put lighting fixtures above and they look amazing when you do so.

The circuity is fairly simple, just make sure that you power the LED’s externally using the 12V power source and you power the HC-06 using the 5V pin on the Arduino. The circuit is exactly the same as my previous Instructable the Bluetooth RGB Shelf Lighting, the only difference between the two is the firmware on the Arduino itself which I will explain in the next step. When wiring to the LED’s its normally a good idea to make some sort of easy disconnect, you can see what I used in the pictures above.

These ceiling tiles are very flexible so it makes for a very easy installation. For the half sized tiles on each side of the drop ceiling we simply held down the tiles with a straight edge and cut it with scissors, the lip around the edge gives you a little bit of tolerance for any mess up. As for the wires ran to the ceiling for the LED’s I was “lucky” and had a giant hole in my ceiling that conveniently led straight to my room up stairs. The original drop ceiling grid was white but painting it black gave it much more of a “Grid” look, which in turn made for better looking separation between pixels.

In order to mount the WS2801’s I took the easy way out and simply used double sided mounting tape to stick them to the ceiling along with duct tape to hold up the wires, I wasn’t too worried about harming the existing ceiling, because of the already present “Giant hole”. When you mount them too the ceiling put them in some time of serpentine pattern. The matrix software will then compensate for what pattern you have them in and change the patterns as needed.

The software for the Arduino is quite simple, it receives incoming pixel data and lights the LED’s accordingly. The guys over at SolderLab were kind enough to offer their sketch for the Uno and Mega Arduino boards. This sketch works with the Glediator and J!nx LED Matrix software, I will explain more in the next step. When using the Arduino Uno software at 500,000 BAUD you are limited to controlling 512 LED’s, if you were to go with the Mega version the firmware is run at 1,000,000 BAUD allowing you to handle roughly 1024 LED’s. Links to both the Uno and Mega Sketches are below.

SolderLab’s Sketches (You will have to change the BAUD as shown below if you use these!)

In order to use this software with Bluetooth integration a little work is required. The HC-06 cannot run at 500,000 BAUD, to fix this you need to modify the default BAUD rate on the Bluetooth transceiver as well as in the Arduino code. We’ll mess with the defaults on the HC-06 in the next step. I’ve already made the necessary changes to Arduino code posted below, in case you don’t want to use Bluetooth serial or your starting fresh with Glediator’s sketch what you need to do is change this: