Open source has finally arrived to microcontrollers. Based on RISC-V instruction set, a group of doctoral students at the Universidad Industrial de Santander in Colombia have been working on an open source 32-bit chip called “Open-V“. 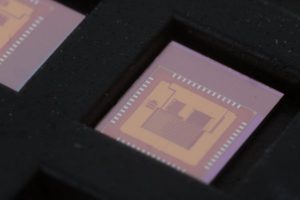 Onchip, the startup of the research team, is focusing on integrated systems and is aiming to build the first system-on-chip designed in Colombia. The team aims to contribute to the growth of the open source community by developing an equivalent of commercial microcontrollers implemented with an ARM M0 core.

The Open-V is a 2x2mm chip that hosts built-in peripherals which any modern microcontroller could have. Currently, it has ADC, DAC, SPI, I2C, UART, GPIO, PWM, and timer peripherals designed and tested in real silicon. Other peripherals, such as USB 2, USB3, internal NVRAM and/or EEPROM, and a convolutional neural network (CNN) are under development.

Open-V core provides compatibility with Arduino, so it is possible to benefit from its rich resources. Also when finish preparing the first patch, demos and tutorials will be released showing how Open-V can be used with the Arduino and other resources.

The ScanaQuad 200 by Ikalogic is a high-performance 4-channel logic analyzer and digital pattern generator. It is designed to be the best companion...