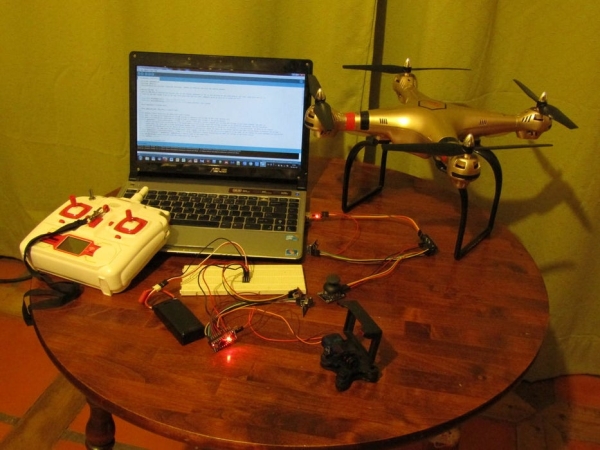 Hi guys, my name is Pedro Castelani and I’m bringing you my first instructable: building a two way radio with arduino for, well, whatever you need it for.

In this project, we will make two seperate circuits which will act as both reciever and transmitter. The most important components are two arduino boards (all of them work) and two nrf24 transciever modules. In my case, I control a servo with a potentiometer from the other arduino and send the voltages of a two cell lipo battery back to the first one.

I intend to use it as an add-one for my drone, which does not possess telemetry nor servo gimbal control. You can, however, use it for other things, such as building your own quadcopter, plane, rc car, etc. From the code supplied you can also make any modifications you want according to your needs. I will also try to explain how to modify it correctly (which took me some time to learn by myself, as I was accustomed to another kind of use for the nrf24 chip).

To begin our project, we need to know all the parts needed. Below is a list of the basic ones needed. I bought most of them at a local electronics shop where I live, so I wont be able to recommend you any place to buy them. You could try Amazon, or any other place. I am not saying you should order them there, but its just a suggestion.

Once all the materials have been mentioned, let’s start talking about the function of the modules.

TwoWayRadio_1 and TwoWayRadio_2WithServo can be found just below this paragraph. There is an explanation inside each code just to make everything easier to understand.

This step is optional, since you might just want to use the potentiometer-joystick designed specifically for arduino and use another module instead of the voltage divider. I, however, planned everything (codes included) for these modules.

My mailbox is across the street from my house because our mailmen don't walk door-to-door, so I never know when...