I was looking for a project to do with my Raspberry Pi and found thisInstructable and thought I would have a go at something similar which worked with Google Play Music. I had a rough idea of what I wanted the final item to end up like and was able to get my dad interested in helping me with the design and construction of the enclosure. 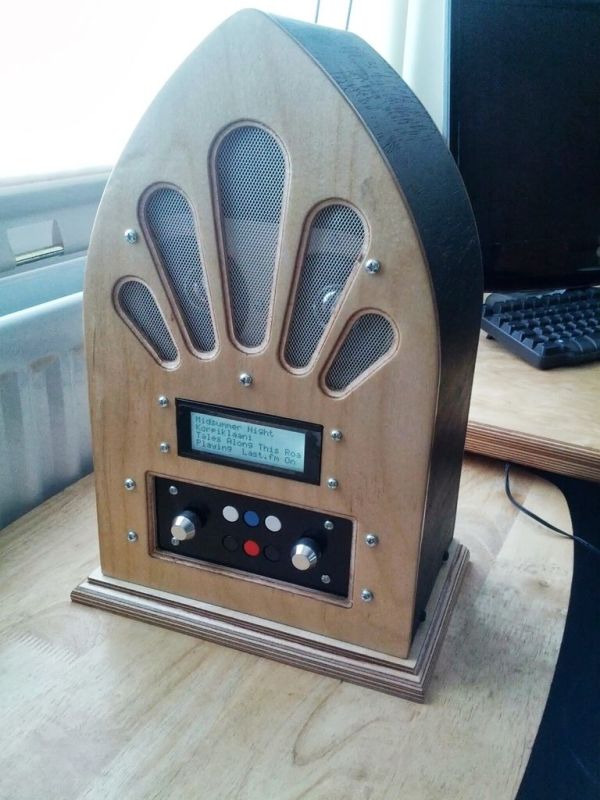 All code and CAD drawings can be found in the GitHub repo.

Before we begin I should probably point out that a reasonably good understanding of electronics and Linux makes this project a lot easier, especially since my Instructables are probably not the easiest to follow (I do try my best), however feel free to ask if something isn’t clear enough.

A full parts list is a little difficult for a project this size so I’ll highlight the important parts only:

As for tools, you just need all the standard electronics and woodworking tools, a few others which may be useful:

I think that is about it for specialist parts and tools, but of course I would highly recommend you read through the entire Instructable before starting work on this project.

Video demoing the finished radio:
I’m having problems embedding videos in my Instructables, here is a link to YouTube: http://www.youtube.com/watch?v=tgPbvo-8iRc 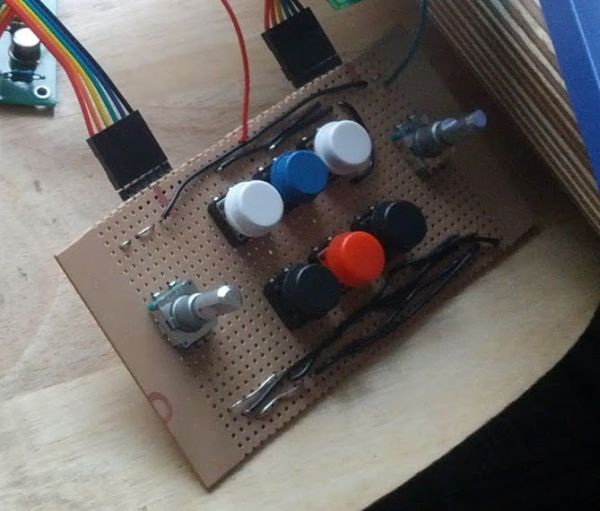 The order in which I went about this project seemed fairly logical and seemed to work for me, so I’ll go with that.

In that case first up is the electronics which control communication between the radio and the user, in my radio the included 6 buttons, two rotary encoders which also have a switch for when they are pressed and a 4 row, 20 column backlit LCD, the majority of this is controlled using a ATmega 328p which interfaces with the Raspberry Pi using RS232 (over a level converter, since the Pi has a logic level of 3.3v and the Arduino is 5v), the one exception is the LCD backlight which is switched on and off using a GPIO pin from the Pi.

So here is an overview of what IO devices were actually connected to the Arduino, how they were connected and why:

Before starting this step it is a good idea to know roughly what size you want your radio to be, as this will limit the maximum size of your front button/encoder panel.

Once you know roughly what size you need to make your front panel you can design it however you like to match the style of enclosure you are planning, the only constraints are that the use the same Arduino code as me (at least without vast changes) it will need to use the same type and function of inputs.

My front panel was simply built on stripboard and bolted to an Acrylic panel which would later be mounted in the enclosure.

On the LCD module I soldered on a small breakout board which tool the 6 and 4 pin ribbon cables which came from the main board and connected them to the appropriate pins on the LCDs 16 pin header.

a 5v and ground wire was needed between the LCD breakout board and button/encoder board as the encoders needed a ground reference and the buttons needed a 5v reference in order to work properly.

If you kept most of the general circuit design similar to mine then there will be very few changes that have to be made to the script before uploading to the Arduino, although it is a good idea to have a look through this list to see if any apply to you:

You will also need some additional Arduino libraries before the script will compile, namely Streaming, CmdMessenger and Encoder. Once theese are in your libraries folder you should be good to go.

Once you have made all your changes, upload the script to the Arduino either by using an Arduino board to upload it or connecting a serial connection to the IC in circuit (I just used a Uno board, it is easier).

Here may be a good time to build the circuit so far on breadboard and test to ensure that everything is working as expected and you get the correct serial data when input devices are actuated and that the LCD responds correctly to serial commands. It is not essential that you do this here, if you prefer you can test the entire circuit before it is moved to the PCB.

The next part of the electronics control the path of the audio signal between the output of the Raspberry Pi and the speakers, although I have not used them in my radio I also included headers on the PCB for a line out (for connection to an external amplifier) and headphone out (for headphones ;).

A summary of the audio signal path is as follows:

If you do not intend to use the line and headphone out then it is probably best to omit them from your design altogether.

My audio electronics are probably not the best designed, and I certainly did not use the best quality speakers (mainly due to size restrictions to fit them in the enclose I had designed) so feel free to improve this in any way you can.

Other electronics needed to make this work: