This example shows how to simulate a simple closed-loop control algorithm in Simulink® and how to run it on an Arduino® board.

Available versions of this example:

In a vehicle using independent wheel control, applying the same power to each wheel generally does not result in the vehicle moving straight. This is caused by mechanical and surface differences experienced by each of the wheels. To reduce deviation in the vehicle heading, a better approach is to use a closed-loop controller which adjusts the power applied to two motors based on the difference in their rates of rotation. One such controller is a well-known proportional-integral-derivative (PID) controller.

PID control is a basic control loop feedback mechanism. The controller minimizes the difference between the measured and the desired value of a chosen system variable by adjusting the system control inputs. 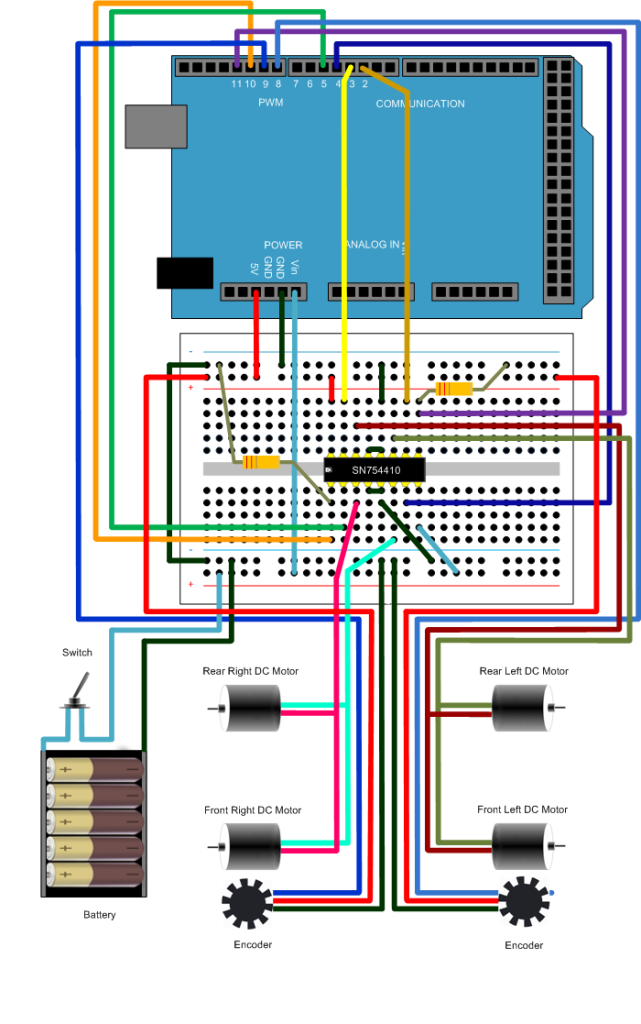 We recommend completing Getting Started with Arduino Hardware.

To run this example you will need the following hardware:

1. Assemble the mobile platform. Attach the two DC motors with encoders to the front wheels.

3. Assemble the battery pack and attach it to the mobile platform using suitable fasteners.

4. Connect the positive end of the battery pack to the switch using the breadboard wires.

The Arduino board alone cannot provide high enough current to power DC motors. For that purpose, you will build the motor controller based on the Texas Instruments SN754410 quadruple high-current half-H driver.

1. Assemble the motor controller using the following circuit diagram. This example shows how to assemble on Arduino Mega2560 board.

2. Connect the controller to the vehicle battery pack following the same circuit diagram.

This step illustrates that independently powered wheels cause deviations in vehicle heading.

2. Open the Open-Loop Controller subsystem. This subsystem controls the vehicle driving. Observe that the controller does not use the difference between two encoder outputs to control the motors.

4. Click Run button in the Simulink toolbar. Click the Scope block and observe that the Encoder Output Mismatch increases over time. This indicates that the vehicle will not move straight.

1. Disconnect the battery power wire leading to the Vin terminal on the Arduino Mega 2560 board since the board will get powered via a USB cable.

2. Connect the Arduino Mega 2560 board to your host computer using USB cable.

3. In the model, click the Deploy To Hardware button on the toolbar.