Several of our recent projects have used a 16 bit PIC24 microcontroller from Microchip.  The PIC24FJ128GC006 contains two 16-bit ADC channels which makes it useful for measuring voltages more accurately than the 10 or 12 bit ADCs you normally find on microcontrollers.  We used this microcontroller for the temperature controller on our recent Soldering Robot and are looking at using it for another project in the future. 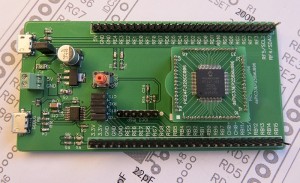 With this problem in mind we decided to design and build a small prototyping board that would work with the PIC24FJ128GC006 as well as one of Microchips DSPIC33EP256MU806 dsPIC series microcontrollers.

The prototyping board was designed with removable daughter boards for the microcontroller.  This means that we can use several different microcontrollers on the same board and if we accidently do something that damages a part of the microcontroller it is easy to replace it without having to unsolder the chip.

The PIC24FJ128GC006 includes a USB port so we added one onto the board, this will come in handy if we want to design any devices that act as a USB device or host.  Programming of the board is done through an IDC header which connects to a Microchip MPLAB ICD 3 programmer.

To make debugging easier we decided to add a USB to UART chip using an FT230X from FTDI.  This connects to one of the UART ports on the microcontroller and gives us the ability to send and receive serial commands like you can with the Arduino boards.  The debug port can also be used to supply power to the board from the 5V USB bus which is then converted down to 3.3V using a linear regulator.

For More Details: Designing a PIC24 Development Board