Control a Furby with Arduino (or other microcontroller)

The Million Dollar Furby: We can rebuild him. We have the technology.

Continued from the previous Instructable where we excised Furby’s primitive brain , it’s now time to replace it with something greater.

This Instructable will detail how to install a new microcontroller in place of Furby’s old brain, making him into a fully controllable robot puppet. We might not have a million dollars to rebuild him, but we won’t need it: I’ll be using the Arduino, a microprocessor and board which can cost under $20.

Note 1: These steps are about the old Furby with the moving plastic eyes (Tiger Electronics, 1998-2001). The new one is different in many ways!

Note 2: WARNING: This is not really a beginner’s project. I really tried to make it “basic,” but it didn’t work out. I’d say it’s somewhere between “Advanced” and “Jedi.” Sorry about that. Therefore, I’ve had to assume you can solder, code, and even build simple robots yourself.

I’ll get you started to the point where we write some code, but after that you are on your own! The reason for this is, the state of microcontroller boards changes so fast, any code I put in here will be obsolete in weeks to months, and the hardware obsolete within a few short year. Instead, I’ll provide the pinouts so you can use whatever board you want, and loose outlines for how control software could work. 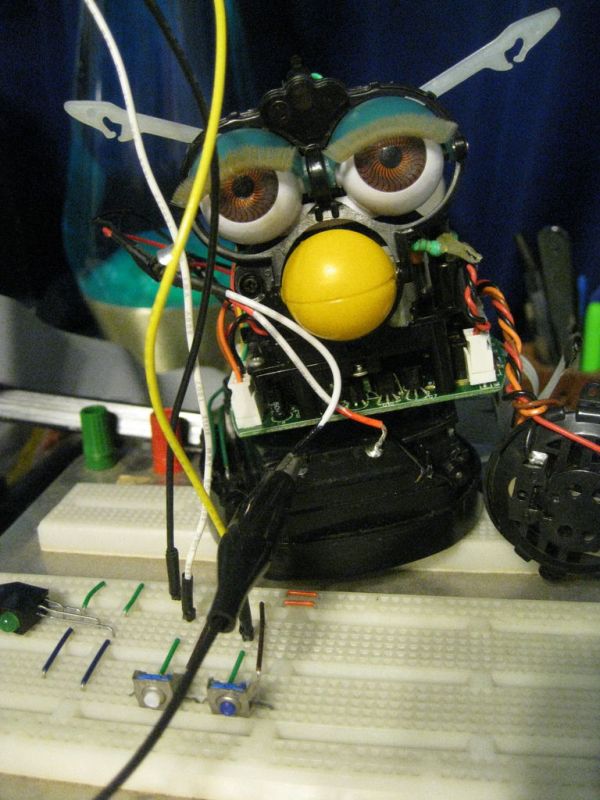 Here’s what you’ll need for this project:

Consult my previous tutorial to dissect Furby and get to his board.

Here’s a pinout for the board. We won’t be using all of them, but here they are for future reference. Numbered counter clockwise from the bottom right:

READ  How to make a runaway cookie box using Arduino

Next we connect wires to these contacts.

I’m using wire ribbon to make things cleaner. This is 25 wires all attached together.

However, we DO need the remaining sensor/actuator contacts from the second daughterboard – mainly the speaker outputs

However, I don’t have enough wires in my ribbon, so I’ll just connect the speakers and IR without any data lines.

On the other end of the ribbon is our microcontroller.

We need to make sure the ribbon contacts are compatible with the microcontroller.

Since I’m using an Arduino, and it already has header pins on its board, I need to attach female pins to the ribbon.

Now we’ve plugged in all the sensor outputs and motor inputs. 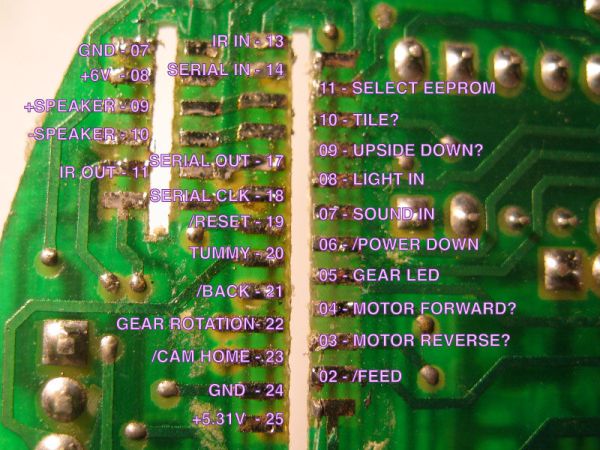 Step 5: Define the pins on the board and connect

This part is a matter of preference, but when I write code, I prefer not to memorize which pins are plugged into which functions.

Thus I’ve defined at the top of the code which functions are which pins.

But, because sometimes I unplug the ribbon and forget which went where, I also defined the ribbon pins.
Therefore, I have three sets of #defines .

A sample – here’s the code that defines the motor functions:

First I define the functions. These are the names I use in the code.
They are defined in terms of the pins on the board

For my setup, I’ve arranged them in a 11×2 grid on the arduino Mega so they are compact.

Lastly, I define where my buttons go. Because they are “negative logic” buttons, that is LOW when pressed, their names start with “X” :

For more detail: Control a Furby with Arduino (or other microcontroller)