How to Build a Liquid Level Gauge Circuit with an Arduino

In this project, we will build a liquid level gauge circuit with an arduino. 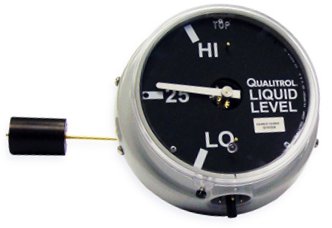 This is a circuit in which a liquid level can be monitored through a gauge.
We read the liquid level from the gauge (low, medium, or high), just as you see above.
With a microcontroller such as the arduino, building this circuit is a pretty simple feat.
The microcontroller can read the analog voltage from the liquid level sensor and then based on that value, we can send a proportional analog signal to the meter so that it can display to us the liquid level determined by the sensor.
Liquid levels can numerous applications, for whenever any type of liquids need to be measured and/or monitored.

The liquid level sensor we will use is built by China Harbin Okumatsu Robot Technology Co and its product item is RB-02S048. This part can easily be obtained on ebay for most of the time under $2 including shipping. It’s very inexpensive.
The sensor is an analog sensor, meaning it outputs an analog voltage in proportion to the amount of liquid it is exposed to. The sensor has a series of parallel wires across the board. These wires are what sense the liquid level that the board is exposed to. We simply connect the analog pin, represented by an S, to an analog pin on the arduino board to read the analog value.
The sensor operates on 5V and needs less than 20mA for operating power current, which means the arduino can easily provide this (so no external power is needed to power it).
The liquid level sensor has 3 pins. It’s very basic. The pinout is shown below.
2 of the pins are for power, 1 connecting to the +5V of the arduino and the other connecting to the ground terminal of the arduino. The other pin, with an S, is the signal pin. This is the pin that outputs the analog voltage signal in proportion to the amount of the sensor which is covered with liquid. This pin connects to an analog pin on the arduino board to be read.
The analog panel meter we will use can be found at Sparkfun here: Analog Panel Meter. The panel has a voltage display, as it is meant to be a voltmeter. But it will deflect perfectly fine, as if it were a panel meter for a liquid level sensor.The reason I say to go with this panel is you won’t really find a specific panel for liquid level sensors, unless you build your own or have it custom ordered, which may be extreme. Therefore, you can just use the panel meter provided by Sparkfun. But if you’re really serious, you can look. This can measure from 0V to 5V of DC voltage with 2.5% accuracy. It’s fairly accurate. When tested with a DC power supply, the corresponding DC voltages were pretty much dead-on with what it should be.

The schematic diagram of the arduino liquid level gauge circuit is shown below. 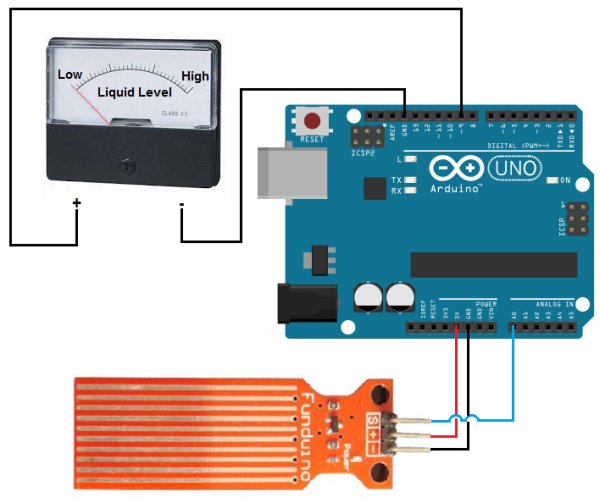 For more detail: How to Build a Liquid Level Gauge Circuit with an Arduino

Monitor 15 contacts with one PIC input

Several previously published Design Ideas and appnotes [1-4] show how to use many pushbuttons with a minimum number of inputs....