I always wanted an old traffic signal and finally got one recently.  However, it was very simply wired so that all the lights were fixed on.  What fun is that?  I also wanted to try out an Arduino controller and thought this would be a nice simple project to incorporate it into. 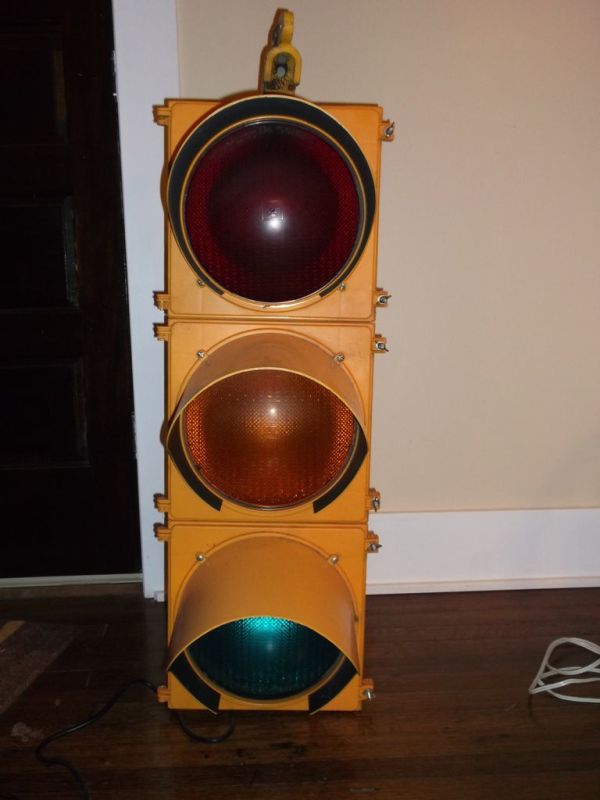 This Instructable will show you how to wire up an old traffic signal with an Arduino controller to function like a real traffic light.  I used a pretty simple program and controls.  Given the power of the Arduino controller, there are a lot of ways you can customize this.

Below is a wiring diagram for the traffic signal.  Hopefully this is pretty clear what gets wired to what.

Above is a photo of the Arduino Uno and the relay module with the wiring between the two attached.  I only had male to male jumpers, so I used a Molex connector and my mad soldering skills to make a connector (second photo).  It is probably easier to use male to female jumpers to connect everything or find a 6 pin jumper to use.  The Arduino has all female sockets and the relay module has all male pins.

If you have not used an Arduino before, see this Instructable by randofo: http://www.instructables.com/id/Intro-to-Arduino/

Download and start the Arduino programming software if you have not already.  Connect the Arduino to your computer with a USB B cable.

Copy and paste the code the below and upload it to the Arduino.  One the code uploads it should start running immediately on the Arduino.  You should see the indicator lights going on and off on the relay unit and hear the relay switches tripping. 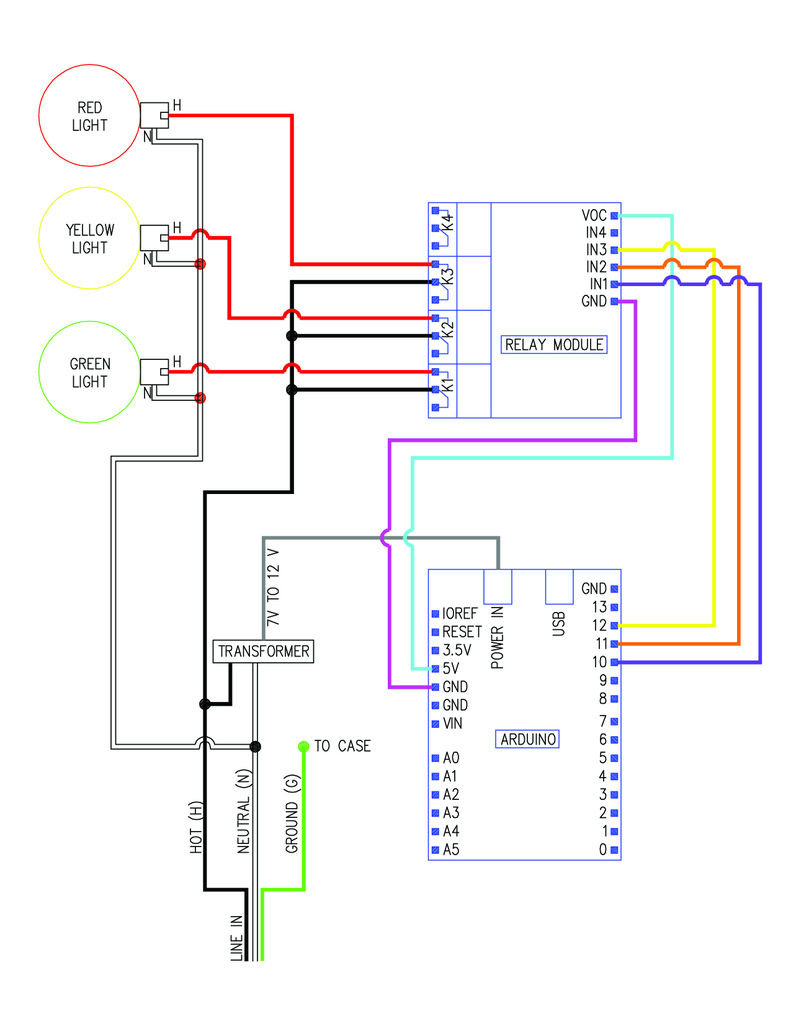 The brains of this thing are going to be an Arduino Uno connected to a relay module.

SainSmart 4-Channel 5V Relay Module
http://www.amazon.com/SainSmart-4-Channel-Relay-Module-Arduino/dp/B0057OC5O8/ref=sr_1_2?ie=UTF8&qid=1362350898&sr=8-2&keywords=RELAY+MODULE
(Note:  This relay is pretty loud.  I can hear it click from across the room.  If anyone has suggestions for something similar that is not as noisy, let me know.)

You will need a power supply (transformer, wall wart, AC/DC adapter) for the Arduino.  I used a 12V 750mA wall wart that I had from some other piece of electronics that had died.  Most 7V to 12 V transformers should work.  You can pick one up at Goodwill for about $2.  Stay away from Radio Shack, they wanted $20-$30 for wall warts!  I am sure someone who knows more about the Arduinos can chime in as to what kind of amperage range you should stay in.  Here’s one from Amazon that should work fine:
http://www.amazon.com/Wall-Adapter-Power-Supply-650mA/dp/B003XZSZWO/ref=pd_bxgy_pc_img_y

You will also need some male to female jumpers to connect the Arduino to the relay module (note, I did not have these but wish I did):
http://www.amazon.com/Jumper-Wires-Premium-200mm–Female/dp/B008MRZSH8/ref=sr_1_1?s=electronics&ie=UTF8&qid=1362360630&sr=1-1&keywords=jumper+wire+male+to+female

Note:  If you do not want to mess with the Arduino, there are a couple ready to go traffic signal controllers available online.  I could have gone this route, but I was really wanting to try out the Arduino:
http://www.ecrater.com/p/12018399/micro-3-traffic-light-signal-controller
http://trafficlightwizard.com/3colorsequencerkitforrotationofflashinglight.aspx

A lamp or appliance cord with ground wire

Other materials you will need will depend on the starting state of your traffic signal.  I used some 16 ga wire (for the internal line voltage wiring), solder, sheet metal screws (for securing the Arduino and relay module, and attaching ground wires to the frame), wire nuts (for connecting line voltage wires), epoxy (to secure transformer), heat shrink tubing (to insulate transformer connections).

You will need a USB B cable to connect the Arduino to your computer to program it.  If you have a USB printer you should already have one of these.

Other tools you will need will again depend on the initial state of your traffic signal.  I used the following:

Cordless drill (for drilling holes in the case)
Soldering Iron (for wire connections and heat shrink tubing)
Dremel tool with milling bit (cut off some the plastic in the case to make mounting the new components easier)
Eye and hearing protection if you are using power tools.

You will need the Arduino programming software to upload the code to the Arduino:
http://arduino.cc/en/main/software[/box]