Have you ever wondered what’s inside your MacBook’s charger? There’s a lot more circuitry crammed into the compact power adapter than you’d expect, including a microprocessor. This charger teardown looks at the numerous components in the charger and explains how they work together to power your laptop. 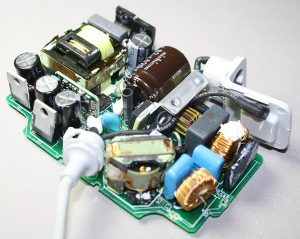 Most consumer electronics, from your cell phone to your television, use a switching power supply to convert AC power from the wall to the low-voltage DC used by electronic circuits. The switching power supply gets its name because it switches power on and off thousands of times a second, which turns out to be a very efficient way to do this conversion.[1]

This is a fantastic quote, but unfortunately it is entirely false. The switching power supply revolution happened before Apple came along, Apple’s design was similar to earlier power supplies[4] and other computers don’t use Rod Holt’s design. Nevertheless, Apple has extensively used switching power supplies and pushes the limits of charger design with their compact, stylish and advanced chargers.

For the teardown I started with a MacBook 85W power supply, model A1172, which is small enough to hold in your palm. The picture below shows several features that can help distinguish the charger from counterfeits: the Apple logo in the case, the metal (not plastic) ground pin on the right, and the serial number next to the ground pin.

Strange as it seems, the best technique I’ve found for opening a charger is to pound on a wood chisel all around the seam to crack it open. With the case opened, the metal heat sinks of the charger are visible. The heat sinks help cool the high-power semiconductors inside the charger.

The other side of the charger shows the circuit board, with the power output at the bottom. Some of the tiny components are visible, but most of the circuitry is covered by the metal heat sink, held in place by yellow insulating tape.

After removing the metal heat sinks, the components of the charger are visible. These metal pieces give the charger a substantial heft, more than you’d expect from a small unit.