I was recently reserching on LEDs and I stumbled upon this page as I read it I found that LEDs are not just used to emit light but the also have the ability to sense light.At first using LED as light sensor sounds complicated but it quiet quickly becomes clear. This is a fun project in which we will be experimenting with LEDs requires minimal parts.

This instructable will explain you how to use a LED as sensor,creating it on a breadboard,making a shield for arduino, how to get a reading from our LED sensor and how to change the sensitivity of our sensor.

This is my first instructable, any suggestions,corrections or comments are welcome.

This instructable is a entry in the arduino contest so if you like it please vote. 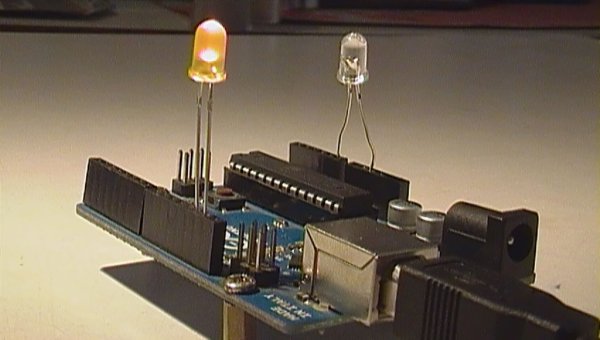 Arduino is an open-source electronics prototyping platform based on flexible, easy-to-use hardware and software. It’s intended for artists, designers, hobbyists, and anyone interested in creating interactive objects or environments.There are many other microcontrollers and microcontroller platforms available for physical computing. Parallax Basic Stamp, Netmedia’s BX-24, Phidgets, MIT’s Handyboard, and many others offer similar functionality. All of these tools take the messy details of microcontroller programming and wrap it up in an easy-to-use package. Arduino also simplifies the process of working with microcontrollers, but it offers some advantage for teachers, students, and interested amateurs over other systems:

~ Inexpensive – Arduino boards are relatively inexpensive compared to other microcontroller platforms. The least expensive version of the Arduino module can be assembled by hand, and even the pre-assembled Arduino modules cost less than $50

~ Open source and extensible software– The Arduino software and is published as open source tools, available for extension by experienced programmers. The language can be expanded through C++ libraries, and people wanting to understand the technical details can make the leap from Arduino to the AVR C programming language on which it’s based. SImilarly, you can add AVR-C code directly into your Arduino programs if you want to.

~ Open source and extensible hardware – The Arduino is based on Atmel’s ATMEGA8 and ATMEGA168 microcontrollers. The plans for the modules are published under a Creative Commons license, so experienced circuit designers can make their own version of the module, extending it and improving it. Even relatively inexperienced users can build the breadboard version of the module in order to understand how it works and save money.

Step 3: How Can A LED Sense Light?

An LED can be used for light detection as well as emission.LED is a simple diode which has been adopted to emit light.Therefore if it is inserted into the circuit the same way as the photodiode it will serve the same function of sensing light

The LEDs will be sensitive to the light which has the wavelength equal to it or lesser than it.

When light falls on the LED a small voltage is produced this voltage produced can be fed to a microcontroller which can read it and follow the further instructions.

The price is about 12.20 $ assuming you are having a multimeter,arduino,breadboard and excluding all the tools.