I have always been interested in a bare-bones Arduino but never really saw the point if it was not practically useful, This is my entry into Little Bits contest, I tried to stay true to the ” little bits” theme and use…well little bits that I had lying around the house. So I introduce to you my bread board companion called Debug TED.

Here is a short video of him in action, when you start the board up the leds run in order from bottum to up to show they all working and when code is loaded onto the board the eyes flash( connected them to TX0 and RX0)

once they where up and running i connected his probe to the 5v line and he indicated that it was in the 4volt range (actual reading 4.6v) and when connected to 3.3v (after accidentally connecting to Gnd) he shows LED3 indicating the 3volt range.

He is made up of a barebones 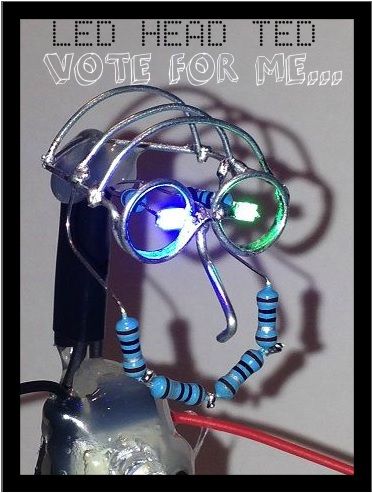 He is a breadboard hardware debug tool , made to be used as a very crude voltage meter, the output of the measured voltage is displayed on his tummy from bottom to top in steps of 1v steps all the way to 5v.

His legs is the main power feed into his body and needs to be supplied with 5v to power him up.

His Glasses and head is the negative to the system and all other negatives is connected to the skull for a GND.

His arms indicated by RED and Black leads is the Volt meter probes for testing voltages in the circuit being built.

Hope you guys like Him if you do and want to see more please vote! I am planning on making him into a kit with more features !

Tutorial guideline to follow, please take note that this is not clear cut tutorial as everyone will have there own why of doing things but i will explain with Lots of photos.

The light bar is made up of 5 LEDs

To give the light bar some strength I ended up using hobbywire to connect all the negatives together which would later be connected through a common 220ohm resistor to ground ( 220ohm is enough because one one led will be switched on at a time) and on the positive lead i soldered different color wires. from top to bottom they were soldered in the following order.

But this is open to your judgement and choice.

The eyes is two green and blue SMD 608size LEDs connected to 220ohm resistors, the glasses was made form hobby wire and soldered to the common negative rail between the two LEDs for a negative feed. the other ends is soldered to two jump wires for use to connect to the bread board TX and RX lines ( not that the face does not integrate into the on board Arduino)

This is one of the only project you will probably ever find that you load the code first ! then build the project, This is because i never plan to reuse, reprogram this chip as it is used as a tool.