Neural acceleration chips seem to be everywhere these days — built into SoCs such as Qualcomm’s Snapdragon 845 or available in acceleration chips built on to add-on boards, such as Google’s Edge TPU chip found on its Coral Dev Board or Aaeon’s Intel/Movidius Myriad X-based AI Core X M.2 and mini-PCIe modules. Now, Seeed has opened pre-orders for a Grove AI HAT for Edge Computing add-on for the Raspberry Pi equipped with a dual-core, Kendryte K210 (translated) RISC-V processor designed to assist the Pi in accelerating AI inference on the edge. 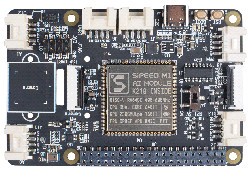 The $24.50 HAT add-on supplies the Kendryte K210 chip via the non-WiFi version of the Indiegogo funded Sipeed MAix M1 module, one of several Sipeed productsdistributed by Seeed. The Kendryte K210 on the Sipeed MAix M1 (or MAix-I) features a 64-bit, dual-core CPU in addition to the 16-bit neural network processor.

The Kendryte K210 runs on a baremetal Kendryte Standalone SDK, or alternatively, FreeRTOS. Seeed has added the full ArduinoCore-API interface to support Arduino IDE, Linux, Windows, Mac OS X, and other development environments. As a result, Raspberry Pi users “can run Grove Arduino Libraries and many excellent Arduino libraries on this board easily,” says Seeed. The Grove AI HAT can also be used as a standalone board.

Whereas the Snapdragon 845 has 3-TOPS AI performance and the Myriad X is rated at 1-TOPS, the 28nm fabricated Kendryte K210 offers more modest acceleration capabilities. According to Seeed’s product page for the earlier Sipeed MAix BiT Kit, which features the same K210 chip without the HAT support, the chip enables 0.25-TOPS @ 0.3W at 400MHz, or when overclocked to 800MHz, 0.5-TOPS, Seeed clocks the HAT version at 600MHz. The chip also supplies an FPU and an audio processor that supports up to 8-mic input.

Later this year, the Grove AI HAT board will be available in a kit with the same LCD and camera add-ons found on the earlier Sipeed MAix BiT Kit for RISC-V AI+IoT. More details on earlier Sipeed modules and kits may be found in this CNXSoft report. 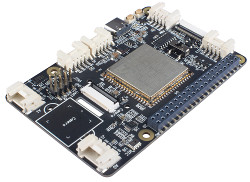 Like other Grove add-ons for the Raspberry Pi, the Grove AI HAT supplies connectors to Seeed’s extensive catalog of Grove sensor and actuator modules. You get six connectors: 2x analog I/Os and single DIO, I2C, UART, and PWM connectors.The Grove AI HAT is further equipped with a USB 2.0 Type-C device port with power and programming support, as well as LCD and camera interfaces. The board provides a digital mic, and a 3-axis accelerometer.There are dedicated JTAG and ISP UART headers, as well as dual 20-pin connectors with I2C, UART, SPI, I2S, PWM, and GPIO. You also get 2x LEDs and both a reset and boot button.

The Grove AI HAT for Edge Computing is available on pre-order for $24.50, with the price moving to $28.90 when the board ships on June 15. More information may be found on Seeed’s Grove AI HAT product page.

READ  Arduino Communication with an Android App via Bluetooth
Share this:

In the second project in my pick to light, I am using WIFI to pass the data between PC and...