So, long ago I  had read about propane fire poofers. They’re pretty cool… I mean, who doesn’t love fire?! But, no matter how awesome, they could get pretty boring after a while of seeing the same large fireball. I never built one because I wanted something that would be exciting and thrilling every time I fired it up. So, I put the project on hold until I could come up with an awesome idea.
Back in December 2010, I was daydreaming in class about who knows what, when I thought of my fire poofer project. I thought back to this project I had read about a while back on Mikey Sklar’s website wher

e he uses an ultrasonic sensor mounted underneath a trampoline to shoot off a fireball every time someone jumps. This is pretty sweet, but it has the potential to get pretty repetitive. 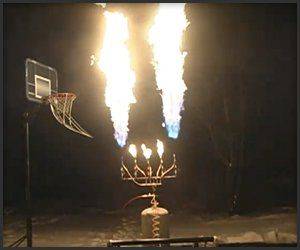 After a few hundred jumps, I would imagine I would get tired of seeing the same small fireball and crave something more. (besides, I don’t own a trampoline!) I tried to think of ways I could apply a fireball shooter to things in ways that would be pretty awesome. I thought of using a microcontroller to sync the fire to the beat of music – now that would be pretty cool, and the patterns would always be different, so it wouldn’t get as boring as fast. Then I thought of the game Guitar Hero, which uses five frets, and I had my idea! Simply interface a Guitar Hero controller to a microcontroller that would power some relays which would in turn fire off solenoid valves on five individual fire poofers! Now this could be cool; a large fire “sculpture” that is playable by anybody. Read on to see how I turned this idea into reality in a week’s time!

Disclaimer:
I figure this is as good a place as any to place a disclaimer about my project. FireHero uses controlled blasts of propane gas to create pyrotechnic flame effects. DO NOT EVEN THINK OF ATTEMPTING THIS PROJECT UNLESS YOU ARE FULLY QUALIFIED AND FEEL COMFORTABLE WORKING WITH EXPLOSIVE GASSES, HIGH PRESSURES, ELECTRICITY, AND OTHER THINGS THAT CAN KILL YOU IF YOU DO NOT KNOW WHAT YOU ARE DOING.

**Note that depending on how you plan on supplying propane, this parts list may change slightly. This will be explained in more detail in the next few steps.**

Before you can safely work with any of the tanks, you’ll need to purge them of any residual propane still inside.

As far as working with propane tanks goes, it’s really not that dangerous as long as you follow some basic safety precautions. Remember to perform the following procedures in an open, well-ventilated area away from any source of ignition (also be aware that brushed motors from fans are a source of ignition). If you buy a new tank, they already come purged completely with inert gas (some are even under a slight vacuum) and you can work with it safely.

If you use a tank that previously held propane, you have to make sure that there is no high pressure propane left – make sure that the tank is at or very close to atmospheric pressure. The best way to do this is to hook up a propane attachment such as a blowtorch or similar and let it burn until it goes out from lack of propane. Remember, there will be propane vapor left in the tank, but as long as it does not mix with air it is not explosive.

Once the tank is purged you need to remove the valve, which is most of the time easier said than done. I’ve had tanks where the valve comes right off after a few hits on the monkey wrench with a hammer, and others where I’ve needed three people helping me to hold the tank down and pull on a cheater bar. Your best bet is to strap the tank to something big using ratchet straps, like the side of a workbench or a steel support column, whatever you have around. Then use a monkey wrench wrench to grab the valve and either throw a cheater bar onto it or hit the crap out of it with a mallet until it starts to budge. The valves unscrew counter-clockwise (NOT reverse-threaded, unlike POL fittings); they screw into the tank with a standard 3/4″ NPT fitting. Don’t worry about mauling the valve with the monkey wrench; you’re not going to use it anyway.

If the monkey wrench idea isn’t working for you, I’ve successfully welded a tool made out of pipe that fits in and around the POL valve to grab it. If you’re using a 20# tank, you may have to get rid of the collar around the valve to make it easier to unscrew. I’ve done this easily with an angle grinder; just double check that you’re not cutting into the metal of the tank, only the collar. Once the valve is loose, unscrew it by hand. *Note: I once had a close call where the POL valve did not completely vent all the propane to the atmosphere (probably due to the excess flow valve), and there was still 30psi or so of propane inside the tank as I started unscrewing the valve. Fortunately, I heard the hissing of propane through the threads before I unscrewed it all the way. Moral of the story: be ABSOLUTELY sure that your tank does not contain any high pressure gas. The best way to completely ensure that your tank is empty is to connect it to a propane appliance such as a grill or torch and let it run until it goes out.

At this point you’re going to want to either purge the tank completely of any residual propane vapor with an inert gas such as CO2 or Nitrogen, or use a 3/4″ plug to cap the tank until you can. Some people say to purge the tank by filling it with water, but I would strongly advise against it. Propane tanks have special oils inside that coat the steel to prevent corrosion, and adding water washes these away and allows for the tank to begin rusting from the inside out.. not something you want on your hands when storing large quantities of high pressure, flammable/explosive gasses. I personally use CO2 to purge my propane tanks. 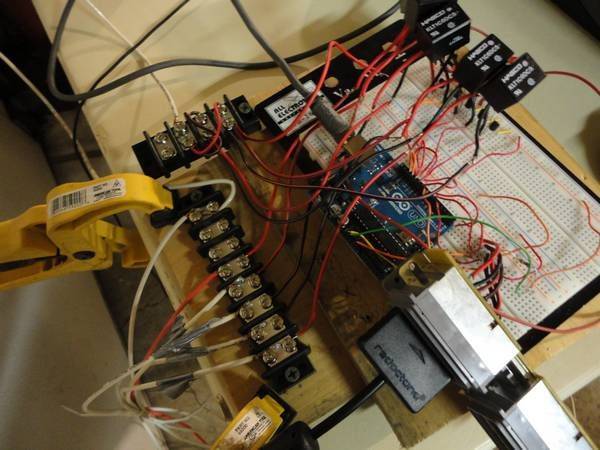 You can see the apparatus I used to purge the 100# tank below. I have a 20# CO2 cylinder and regulator which I use whenever I’m working with propane systems to purge and check for leaks.

The method for purging involves using a 3/4″x1/4″ bushing attached to a 1/4″ pipe tee with two ball valves on either side. One ball valve is the discharge, and the other is connected to the CO2 supply. close the exhaust valve and open the supply valve to fill the tank with CO2 (I like to bring it up to at least 30-40psi) so that it contains a mixture of CO2 and the residual propane. Then close the supply and once the tank is in an open area (I only purge outside) open the exhaust valve to purge. Repeat this process 2-3 more times until you’re comfortable that there’s no more propane.

Don’t be freaked out when the tank still smells like propane afterwards – the propane gas is long gone but the Mercaptans that propane companies use to give the gas its odor will linger for a long time. My garage smelled like “propane” the whole time I was building FireHero and working on the tanks, but it’s not a cause for alarm.  You can even take a blow torch and pass it over the opening of the tank, nothing will happen.