“THE CUBE” is a 3D jigsaw puzzle, with the added feature that a puzzle piece vibrates for approximately a second when it is placed in the correct place in the puzzle. We accomplished this by building an electrical design such that a circuit delivering power to a vibration motor was completed each time a puzzle piece was correctly placed onto a base. We hope that our project will reach the educational goal of improving the process of learning spatial skills by providing positive feedback and encouragement. Our qualitative results indicated that the vibration feedback did make the puzzle experience more fun: our table was occupied with visitors for the duration of the event, and “THE CUBE” was voted “Most Creative”. When completed, “THE CUBE” looks like the picture to the right:

In our final haptics project, we aimed to build a haptic device that targeted a more fundamental skill in life than something learned in a high school. We began considering concepts learned at a younger age than high school to meet this interest and came to the conclusion that we wanted to influence learning of spatial awareness in children. To explore the effects of haptic feedback on the experience of developing spatial awareness in children aged seven through ten, we came up with “THE CUBE”.

Below is a description of our research into previous work as it relates to several aspects of our project– spatial learning, 3D puzzles, and vibrotactile feedback. Each of these sources gave us some sort of insight and/or molded our approach.

Summary: This paper describes a set of cubes that, when interlocked, rendered their position and orientation onto a computer monitor. Children with and without Developmental Coordination Disorder (DCD) played challenging visual games with these blocks, and their spatial intelligence measurably improved.

Significance to our project: Although we came across this paper after we completed the project, it was still quite useful for future work purposes. This experimental procedure is similar to one we could implement if we were to test our puzzle on our target age group (7-10 years). With specific challenges and a more modular design, we could make spatial learning even more measureable.

2) Evaluation of a Vibrotactile Feedback Device for Spatial Guidance

Summary: This paper describes an experiment that compared spatial performance with vibrotactile cues to that with verbal cues. This was done by commanding the right arm to translate and rotate to different orientations. The result (concluded from the number of errors made in each case) was that vibrotactile feedback was more effective with rotational commands, and verbal feedback was more effective for translational feedback.

Significance to our project: We decided to go with a 3D puzzle instead of a planar one because of this paper. If pieces must be oriented correctly in 3D space, it will maximize the effect of vibrotactile feedback features of the puzzle.

Summary: This paper gives results of a series of tests designed to measure the spatial competencies of 5, 7, and 10 year olds. The tests consisted of
1) Training: a normal maze with cues as to where to go and find certain objects.
2) Rotating the perspective of the user 180o.
3) Rotating all the cues.
4) Deleting cues.
5) Deleting cues and then rotating the perspective of the user.
The results found that as the tests became increasingly more difficult, the younger children got more and more lost and made more errors. The main result of the paper is that the development period for complex spatial awareness and development was confirmed at the ages between 5 and 10, as previously suspected.

Significance to our project: This could point us to the target age group of our 3D puzzle for the sake of spatial skill development. If we market this toward early elementary school children, it will be most effective according to this study.

Summary: This paper talks about an experiment to test the spatial knowledge gained by physiotherapy students from solving virtual 3D puzzles related to human anatomy. The effectiveness of the puzzles was evaluated before and after the puzzles by having the students: 1) answer questions about anatomical facts 2) take a spatial intelligence test, 3) talk about their confidence in that anatomical knowledge, and 4) talk about the usability and difficulty with the puzzles. The study concluded that not only did the 3D puzzles improve anatomical and spatial knowledge and intelligence, but they also greatly increased motivation for learning such things.

Significance to our project: We became more confident in our choice of project after reading this paper, and broadened our possible audience to medical students trying to learn anatomy in a way that is not just rote memorization. This also got us thinking about anyone else that would need to have 3D spatial awareness for their job and might want to learn it in a more fun way—mechanics, electricians, plumbers, and interior designers were a few we came up with. 3D puzzles could be customized for training for each of these professions.

Summary: This paper is very brief, but it describes the design of a 3D puzzle for blind or visually impaired children which plays music for each piece successfully positioned. Each piece also has an interesting surface topology corresponding to the music it plays.

Significance to our project: We were hoping we would get some information about how this idea worked for the children that it was meant for, but this was too preliminary. We did gain from this the fact that our idea was novel in that it provided realtime haptic feedback. This was the most similar project we could find in existence.

Summary: This paper discusses the use of virtual environments to solve 3D puzzles, for eventual use for surgical or archeological reconstruction. Subjects were asked to put together a 3D virtual puzzle with the Phantom Premium, Delta, and Spidar robots. It was found that with force feedback, task completion times decreased significantly. The Spidar was subjectively found to be the easiest to use because it allowed for more rotational freedom.

Significance to our project: Although we eventually rejected the idea of creating a virtual puzzle instead of a physical one, this paper got us thinking about that possibility. It would be a great future step once we have a physical puzzle made. This sort of design would be easy to change and manipulate for different purposes, however, it would probably be less fun to play with.

Electrical Design:
Our electrical design consisted of a motor that ran off of a 12 V power supply. The motor was connected to a MOSFET so turning the motor on and off was controlled by a logic circuit. We designed the logic circuit to run off of 5V, so used a voltage regulator to run the logic circuit. The circuit itself had a high pass filter, so when the connection was made, the input to the filter saw a 5V step input, and output a decay with an exponential decay to 2.5 V into the positive input of a comparator, with the negative input at 2.6V, so the transistor would be in its ON state for a short amount of time after the step input.
The motor we used had an eccentric rotating mass on its shaft, so caused the puzzle piece to vibrate whenever it was on. The schematic below shows our circuitry, with all the components in the box inside each piece, and the switches representing the connections. 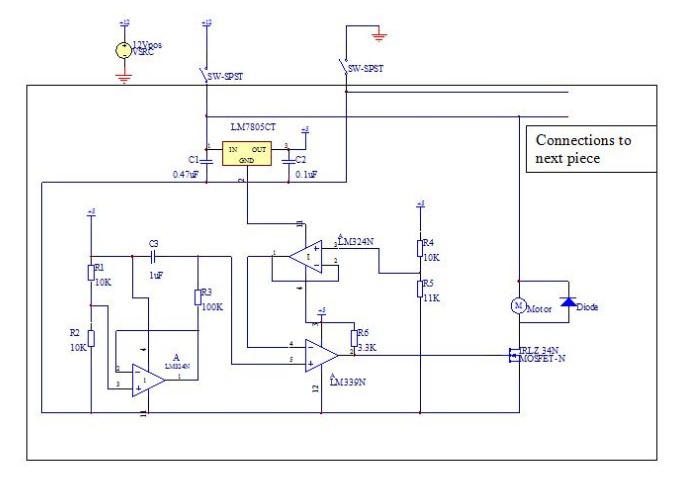 Mechanical Design:
The puzzle was made out of ¼” thick black acrylic. We lasercut pieces out of the acrylic and made hollow boxes as each puzzle pieces. The boxes were hollow so they could hold the electronics. Over the course of manufacturing, we learned about the tolerance on the laserCAMM being greater than our application allowed for. Not accounting for the tolerance on the laser cutter made assembly a lot more difficult for us than it would otherwise have been. The inaccuracy in our build also caused our electrical contacts between pieces to be less stable than optimal.
For the contacts themselves, we used dome contacts from Snaptron, Inc. that compressed to a flat connector when pressed with adequate force to form a stable contact. We also made fake connectors on each puzzle so as not to give information on the puzzle through the connectors. With our tolerance issues, the contacts would not always form a stable connection giving us intermittent unintended vibrotactile feedback as we put the puzzle together.

For more detail: THE CUBE: A 3D Vibration Jigsaw Puzzle

READ  Pong Playing Flexible Screen on a Shirt
‹ Previous Next ›

After some months out, I come back with my last board, the SIM900 Breakout Board. It’s a board based on...