Voting systems are one of the finest examples of Embedded devices and applications. The complexity and robustness of a voting system depends on the number of voters involved. Here you could see a simple Arduino based voting system that would be a great fit for small-scale elections such as in schools or colleges. This system was designed to ensure security and the coolest thing is the whole voting process can be done with assembled hardware and Arduino IDE. 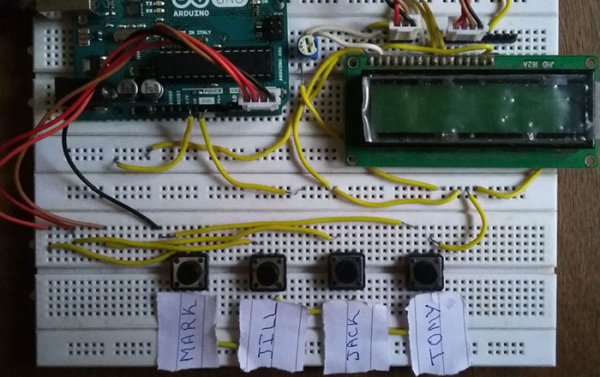 This voting system takes vote inputs from pins A2 to A5 of Arduino. A LCD used to show candidates name which was connected in 4 bit mode to the Arduino. Then connect the Arduino to the computer using the serial connection through the USB.

Security will be the biggest concern in any kind of embedded system. So the security of this system is reinforced by a password input method after initializing the system. The system will permit the poll organizer to operate only after entering the correct password.

The code was constructed in such a way the Arduino requires single character commands to allow voter to cast the vote. I have programmed Arduino to let the voter cast the vote on input of character “V” in the serial monitor screen. And this command allows only a single vote to be casted in a single instant. This prevents voter to cast multiple fake votes.

Poll results can be displayed by entering character command “D” in the serial monitor. Entering “D” will make Arduino to send the poll tally to the serial monitor in sequential order which we have programmed. This will help us to get the results instantaneously.