Such is the popularity of DC-to-DC voltage converters (“switching regulators”)––due to their high efficiency across wide input- and output-voltage ranges––that chip makers have focused a lot of research dollars on squeezing the essential components of the devices into modules. These modules typically include pulse-width-modulation (PWM) controllers and switching elements in a single, compact package, easing the design work for the engineer. 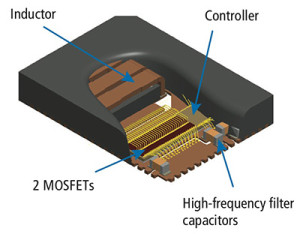 However, until recently, it has proven difficult to include the energy-storage device (the inductor) inside the package. This has dictated that the engineer must specify, source, and design-in the inductor as a peripheral component, adding complexity and consuming board space. Now, a new generation of high-frequency switching regulators has enabled the use of smaller inductors enabling the devices to be housed inside the component vendor’s package.

This article briefly explains the role of an inductor in a switching-regulator design before moving on to describe the technical merits and trade-offs of selecting a power module with an integrated inductor.

Anatomy of a switching regulator

Switching regulators use a switching element (typically one or two metal-oxide semiconductor field-effect transistors (MOSFETs)) and an energy-storage device (an inductor) to efficiently regulate an input voltage to a lower (“buck”) or higher (“boost”) output voltage.

The inductor performs a fundamental role in the switching regulator. In a buck regulator, when the transistor is powered, the magnetic field in the inductor builds up, storing energy. The voltage drop across the inductor (which is proportional to the duty cycle of the transistor) opposes (or “bucks”) part of the input voltage. When the transistor switches off, the inductor opposes the change by flipping its electromotive force (EMF) and supplies current to the load itself via the diode.

For More Details: The Advantages (and Drawbacks) of DC-to-DC Voltage Converters with Integrated Inductors

The Miniaturization of GPS Systems

Positioning is an increasingly important part of an embedded design as more and more devices become mobile. Adding this capability...