For a beginner in the world of Arduino, we present some of the best Arduino starter kits which help you to get familiar with all the essential components required to build some basic circuits.The Arduino kits reviewed here are not only good for students but also for people who have very little knowledge in coding who are enthusiastic to learn more.

There are hundreds of Arduino starter pack combinations available online for you to choose and buy. We have compiled together 8 of them that are perfect for beginners. The review of each starter kit Arduino is provided with users’ view of the product, Arduino starter kit components, other contents of the kit, possible circuits that can be built with each kit, and a detailed buying guide to assist you throughout.
Since each kit is different from the other, it is important to know all minute details about the product, and this, we have done for you!! 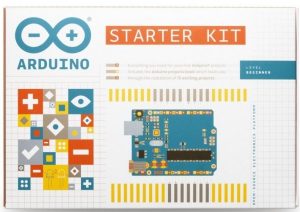 The official Arduino starter kit from Arduino is by far the best & “Complete Arduino Starter Kit” for a beginner. With over 200 useful components and 50 additional electronic parts, the kit comes with a high quality microcontroller compatible with Arduino Uno R3. The whole kit is available at an economic price.

Inside the Arduino Uno Starter Kit Box from Arduino

The 170 page book comes with all the basics that you need to need to know about the subject, and is also fun to experiment on. The book contains the following projects.

The Arduino Uno projects book that is provided along with this kit gives you an insight on the basics of programming, by explaining the codes of all the projects in the simplest way possible.

For a starter, the book also provides info on the basic components provided along with the kit. The book also covers some basic theory on electronics and then runs into 15 pages of fun projects. All the projects are neatly presented with clear descriptions of the components needed, schematic, and the source code.

“The Arduino Uno R3 Starter Kit from Arduino is the best in its class and is a favorite guide for the novice.” 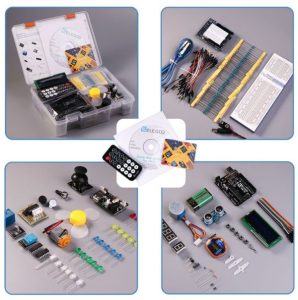 The Arduino starter kit by Elegoo is extremely popular for the beginners in the world of Arduino. The kit has helped many starters to get a firm base on the idea of Arduino, and to move further to an advanced level. Though the Arduino board is a Chinese clone of the original one, it does keep up to the standards. The whole board is neatly soldered and clearly placed.

The kit comes in a hard plastic box which can be used to store all the components and electronic parts in future. An instructional CD is available along with the kit which has a PDF file of 22 Arduino tutorials with fun projects.

The starter kit Arduino also comes with a stepper motor and a stepper motor driver. Such components not only helps you in building basic projects, but also in future while building advanced ones. A power supply module is alos available which helps you in supplying additional 5V and 3.3V input to various sensors.

The greatest advantage of the Elegoo Arduino beginner kit is that it is not only for beginners, but also for advanced users. Once you get to know the basics, y7ou can get into advanced projects like Robotics, Weather Monitoring, Motor Control and so on.

“Elegoo Arduino starter kit has it all, to make you a quick learner of Arduino through simple yet5 fun projects.”

The Vilros ultimate starter kit comes with the original Arduino Uno board and includes some basic components that will guide you as a beginner. The kit also includes a 72 page instruction manual, which contains some basic projects and an electronics tutorial on different components that comes with the kit. All the circuits are neatly labelled in the manual with warning labels for users to watch out for while designing various circuits.

“The Vilros Ultimate Starter kit lays it all out and gives you all the components you will ever have to use as a starter.” 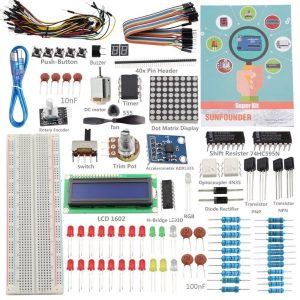 The Sunfounder Super Starter Arduino kit is ideal for people who are intermediately knowledge in Arduino and need sophisticated components for advanced Arduino projects. The one point to be noted is that the Arduino board is not included in this kit. You will have to buy the board separately to carry on with your Arduino projects.

Apart from the components, the kit contains a tutorial CD and a small instruction guide book. Though the booklet is small and hard to read, it has a lot of basic experiments to get you started with Arduino. The kit contains a CDwhich included circuit, code, video & Fritzing. The addition of the computer application “Fritzing” is a bonus because it develops your skills to design circuits on PC before building and mounting circuits practically.

“If you are trying to move over from a beginner to an advanced Arduino user, the Sunfounder Arduino starter pack will be the right choice for you.”

#5. Osoyoo Ultimate Starter Kit for Arduino with Mega2560 and UNO R3 Board Projects 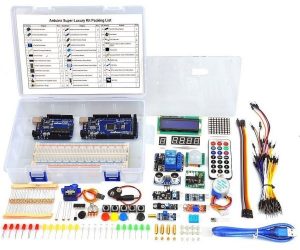 The Osoyoo Arduino Starter Kit is a Chinese product and is pretty much worth for its low price. The kit offers an Arduino Uno R3 compatible board along with a Mega2560 compatible board. Buying both these boards separately itself will cost almost the kit price. The kit comes with electronic components that are more than enough to carry out your basic projects. The kit comes with a tutorial for 21 projects, where each project is explained in detail with circuit diagram, source codes and step-by-step procedures.

Inside the Osoyoo Ultimate Starter Kit

Showing 1 to 10 of 18 entries
PreviousNext

The tutorials available are:-

“The Osoyoo ultimate starter kit is economic, with abundant components, and a good tutorial.” 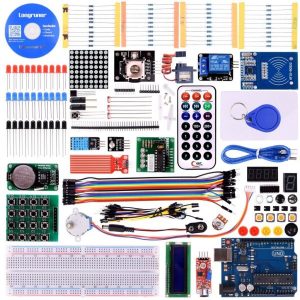 The Longruner Arduino starter pack comes with an Arduino Uno R3 board and is well known to be an RFID starter kit. It includes the basic RFID components like the RC522 module, the RFID proximity ID round tag and the RFID proximity ID card tag. All RFID based projects using Arduino can be experimented and learned at affordable costs.

Inside the Longruner Starter Kit

For the price of the kit, you get a great collection of parts along with a CD that is filled with tutorials that are apt for beginners as well as advanced learners. All the tutorials provide source codes and circuit diagrams.

“If you are looking out for a starter kit with RFID based components and a genuine Arduino board, the Longruner starter kit is the best product to buy out. Economic & worthy!!” 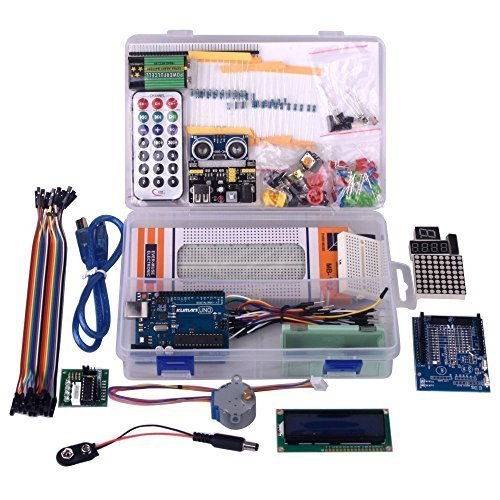 Though the Kuman Arduino kit has a custom Arduino board that is compatible with Arduino Uno, it’s the only one among the lot to have all the desired components in one package. With a total of 44 types of components and additional items like power supply module, servo motor, DC motor, DC prototype expansion board and more, this kit is one of the best sellers in it’s category.

The kit contains tutorials in the form of a CD-ROM. The CD includes eBooks, project circuits, explanation, step-by-step instructions and tried out source codes, all in the form of PDF files. A total of 23 projects are included.

“For reliable components at an affordable price, with a neat tutorial filled with fun and info, Kuman Arduino Starter kit  is the best choice.” 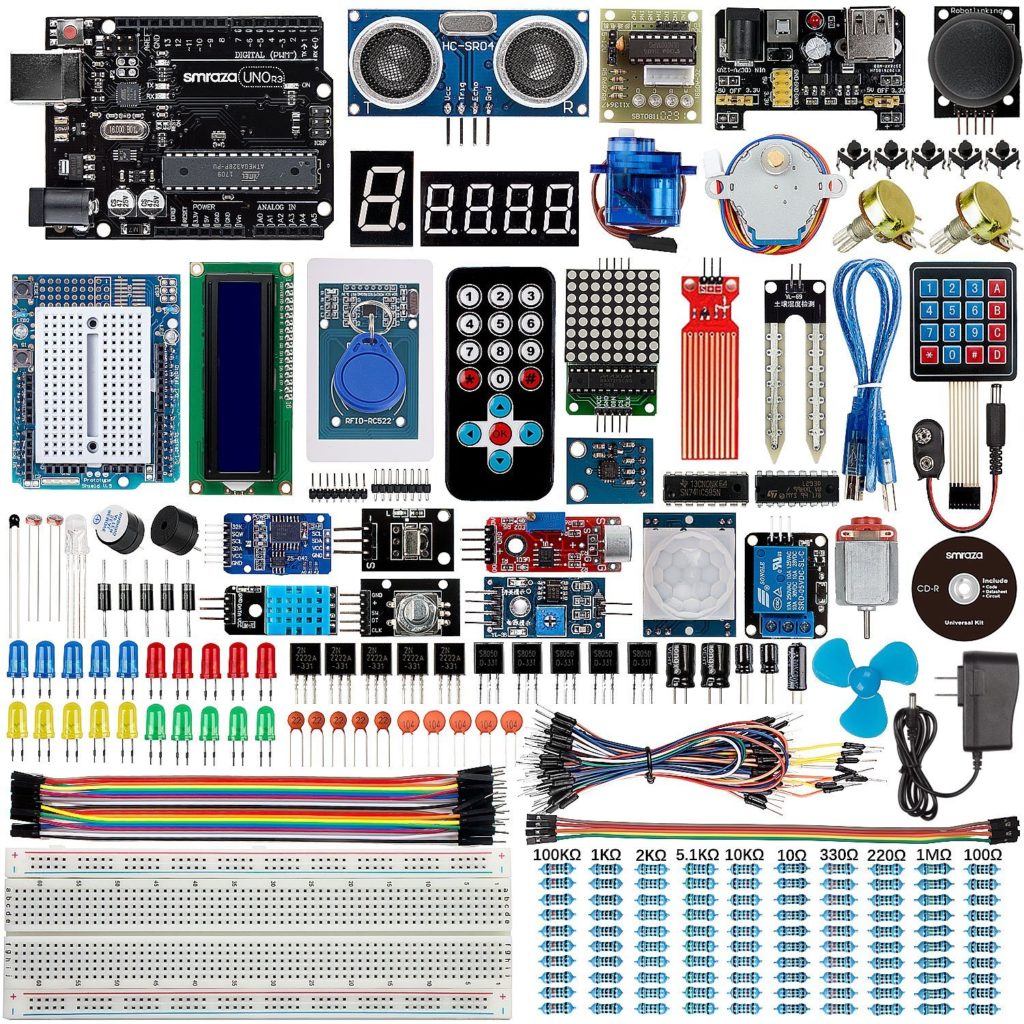 The Smraza Arduino kit includes a custom made Arduino Uno board and comes with around 200 useful electronic components including a large breadboard. The kit includes 35 tutorials in the form of a CD. This CD includes source codes, datasheet of all the components in the kit, and detailed circuit explanation of all the basic and advanced projects.

Inside the Smraza Starter Kit for Arduino

The kit includes a humidity sensor, LCD module, and more. One drawback is the absence of DC motor, stepper motor and capacitors. A servo motor is provided instead. The 9 Volt 1 Ampere power supply module is an added element that is compatible to both Arduino Uno and Mega 2560.