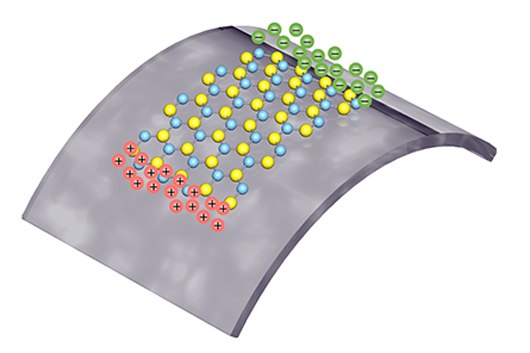 Researchers from Columbia University and the Georgia Institute of Technology are laying claim to having observed piezoelectricity in an atomically thin material for the first time. The effect was demonstrated in the world’s thinnest electric generator made from a two-dimensional molybdenum disulfide (MoS2) material, which had previously been predicted to exhibit such properties.

Co-leader of the research, Zhong Lin Wang, has previously been involved in developing the world’s first practical piezoelectric nanogenerator, followed by the first self-powered nanodevice with wireless data transmission, and a low-cost, large-scale nanogenerator. Now, with colleagues including fellow co-leader James Hone, Wang has been involved in developing the world’s thinnest electric generator.

The device was created by placing thin layers of MoS2, a material made up of a single layer of atoms, on flexible plastic substrates and using optical techniques to determine how the material’s crystal lattices were oriented. This process is required because MoS2‘s crystalline structure makes the material piezoelectric only in certain orientations. It is also highly polar, meaning that an odd number of atomic layers are needed to ensure the piezoelectric effect isn’t canceled out.

Metal electrodes were then patterned onto the flakes and the current flows as the samples were mechanically deformed were measured. Confirming theoretical predictions published last year, the team found that the output voltage reversed sign when the direction of applied strain was changed, with the voltage disappearing entirely in samples with an even number of layers.

“What’s really interesting is we’ve now found that a material like MoS2, which is not piezoelectric in bulk form, can become piezoelectric when it is thinned down to a single atomic layer,” says Lei Wang, a postdoctoral fellow in Hone’s group. This is because bulk MoS2 is made up of successive layers that are oriented in opposite directions, thereby generating positive and negative voltages that cancel each other out.

Today we are going to make a real time clock Arduino shield. Doing so will give you a simple way...