After playing around with the SynthNV signal generator/power detector discussed in the previous post I realized what a useful a tool it is for RF testing. While its a terrific tool for VHF/UHF/Microwave testing, the SynthNV has a couple of serious limitations for amateur use in the HF region – the signal generator has a minimum frequency of 35 MHz, the generated signal has a lot of harmonics and its a fairly expensive piece of gear. This project is a fairly simple, very low cost Scalar Network Analyzer that does the same thing in the HF bands from 1MHz to 30MHz. If you buy the parts from China or Ebay and do some scrounging it should cost you less than $20 to build.

What is a Scalar Network Analyzer and why do you need one?

The principle is to stimulate an electrical network with a sinewave and measure the magnitude of the response. If we sweep over a range of frequencies and measure the power transmitted through the network we can determine its frequency response.  Transfer from the input port (1) to the output port (2) is called the network’s S21 S-parameter response. By using a return loss bridge or coupler we can measure the reflected power – the S11 response. A Vector Network Analyzer is a much more complex piece of gear that measures the phase response of the network as well.

In practical terms, a Scalar Network Analyzer allows you to test and characterize crystal filters, attenuators, highpass/lowpass/bandpass filters, cable losses, and antennas among other things. Its also useful as a signal generator and the power detector can be used on its own for power measurements.

READ  25 Useful Arduino Shields That You Might Need to Get 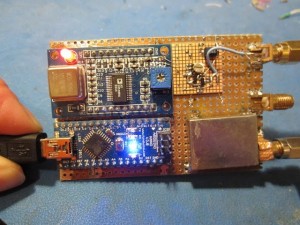 I make no promises as to the accuracy of this device. In my testing it does what I expect and the measurements seem very reasonable but its not a lab quality tool. It is however a fun and useful project to build and experiment with. I’m still finding uses for it!

The hardware for the Simple Scalar Network Analyser (SSNA) consists of a host PC which provides the user interface and a USB connected signal generator/power detector module. The signal generator is an inexpensive AD9850 DDS module which can be bought on Ebay or from a number of electronics suppliers for about $10 USD. The AD9850 chip can synthesize a fairly clean sinewave from below 1Hz to approximately 50MHz. In this application the useful range is about 1MHz to 30MHz because of the coupling capacitors and the lowpass filter used on the module. The power detector uses an Analog Devices AD8307 log power detector chip. The AD8307 has a range of  -75dbm to +17dbm from DC to 500MHz. A $3 Arduino Nano clone controls the DDS and digitizes the analog output of the AD8307. The Nano has a built in USB to serial interface which is used to communicate with the host PC. The signal generator/power detector module runs off 5V USB power and consumes only 150ma from the host.

Everyone would have known the use of notice board around our daily life. Even it plays a vital role in...