The $120 to $165 “SparkFun Autonomous Kit for Sphero RVR” extends the $250 Sphero RVR robot with an Raspberry Pi Zero W, a pan-tilt camera, GPS, and an optional ToF distance sensor.

SparkFun Electronics recently completed a successful Kickstarter project for its Sphero RVR, a four-wheeled tank-treaded robot that offers optional programming via a Raspberry Pi, Arduino, or BBC micro:bit. The robot is now publicly available for pre-order at $250 and SparkFun has announced two SparkFun Autonomous Kits for the Sphero RVR that add pan-tilt camera and location capabilities to the robot based on a Raspberry Pi Zero W. 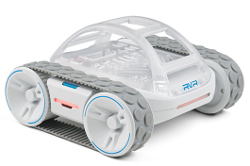 SparkFun also announced several non-Linux products that do not build on the Sphero RVR. These include an open-spec, $15 SparkFun Edge Development Board
which is equipped with Ambiq Micro’s new “ultra-efficient” Cortex-M4F based Apollo3 Blue MCU with a 48MHz clock and 96MHz burst mode. The processor can run TensorFlow Lite using only 6uA/MHz, says SparkFun. There’s also a pair of $30 SparkFun Arduino Pro Mini Starter Kits based on an Arduino Pro Mini board available in 5V/16MHz and 3.3V/8MHz versions. 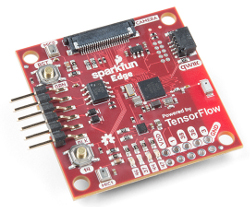 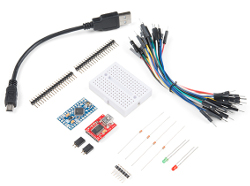 
SparkFun, which is an online retailer and electronics training firm as well as a vendor of self-branded products, also announced it has opened pre-orders for Nvidia’s Linux-driven, $99 Jetson Nano Developer Kit. The recently announced kit includes Nvidia’s latest stripped-down Jetson Nano module, as well as a Raspberry Pi-like feature set.

The SparkFun Autonomous Kits require the separate purchase of the Sphero RVR robot. The robot’s four wheels are powered by dual motors and are available with various tank treads. The Sphero RVR includes a roll cage, LEDs, 20 pole magnetic encoders, and a removable battery that can be recharged via a USB Type-C port.

A 9-axis IMU is onboard along with current draw, light, and color sensors. There’s also an IR sensor that can communicate with other SparkFun robots including the spherical, mobile, $2,895 Bolt.

A micro-USB/UART port enables programming by the RPi, Arduino, and micro:bit boards. A STEAM-oriented Sphero Edu App for mobile devices is also available.

There’s also a U-Blox GPS module and servo boards. The Advanced kit is identical but adds a Time-of-Flight (ToF) depth-sensing capability. While the SparkFun RVR (pronounced “Rover”) is available pre-assembled, the Autonomous Kits are in kit form. Like the Sphero RVR, both versions of the kit are on pre-order, with shipments due in early Fall.

READ  JACKPOT!: THE TRIALS AND TRIBULATIONS OF TURNING A SLOT MACHINE INTO AN ATM

The ToF sensors on the Advanced kit are enabled via a pair of SparkFun Distance Sensor Breakout (VL53L1X) ToF boards. The board offers 40mm to 4-meter object sensing with +/-1mm resolution and a 15° to 27° field of view.

The WiFi equipped Raspberry Pi Zero W SBC has a 1GHz ARM11-based Broadcom BCM2836 SoC with 512MB RAM, which is enough to “run most of the machine vision programs that will run on the Raspberry Pi,” says SparkFun. It is unclear if it can run Google’s TensorFlow for the Raspberry Pi, which officially requires a quad-core RPi 2 or 3. It may be able to run TensorFlow Lite. These and other ML solutions for the Pi are summed up in this TechRepublic post.

The $299.99 Sphero RVR, the $119.95 SparkFun Basic Autonomous Kit for Sphero RVR, and the $164.95 SparkFun Advanced Autonomous Kit for Sphero RVR are available for pre-order with shipments expected in the early Fall. More information may be found in the Sphero announcement, which offers links to product pages for all these products, as well as the SparkFun Edge Development Board, the Arduino Pro kits, and the Jetson Nano kit.

Serial communication was once the most widely used method of transferring data between computers. Many computing devices that you have...