Energy-harvesting applications typically rely on scavenging trickles of energy from body heat, vibrations, or ambient RF on one hand or on extracting power from high-energy sources such as solar, wind, and the like. In these cases, access to a sustained energy source, whether low or high energy, can generally ensure continuous or near continuous operation of circuits. 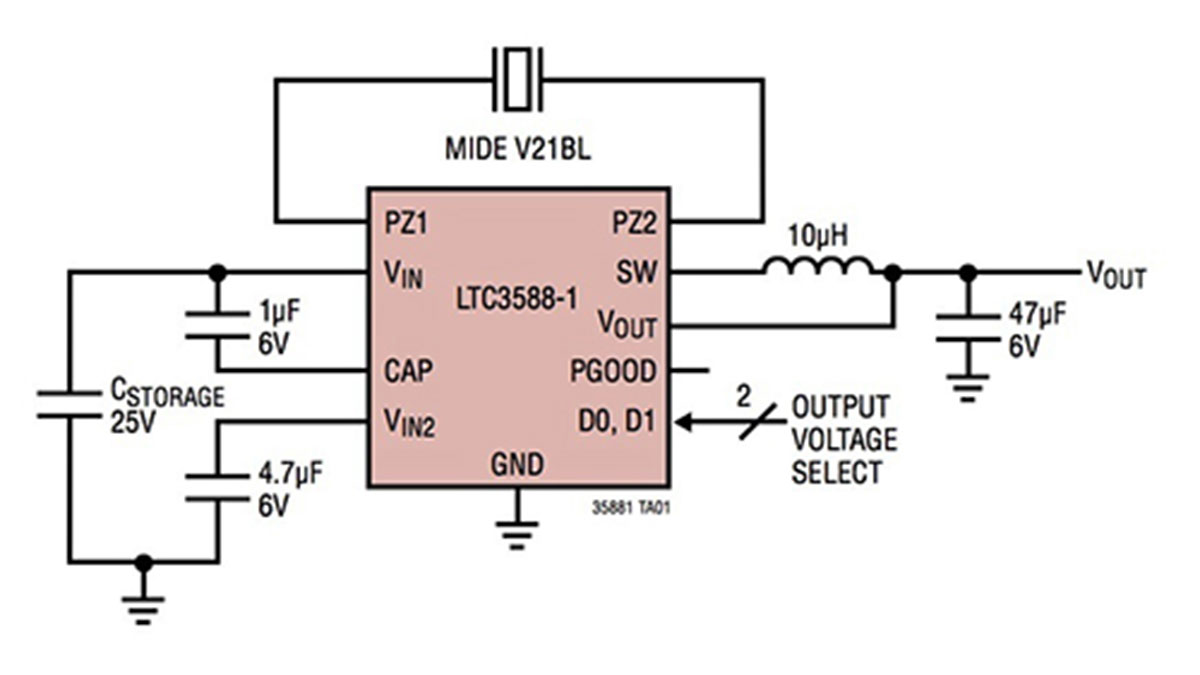 Pulse harvesting, however, draws power from bursts of energy associated with a button push, sudden vibration, or other short-lived energy source. Outside of the pulse event itself, this approach leaves circuits with no additional power source beyond what excess energy they can store from pulse events. Despite these challenges, engineers have applied this approach to applications ranging from basic momentary pushbutton switches to complex wireless monitoring systems powered by the high-energy vibrations of railroad car wheels running across its tracks.

Pulse-energy harvesting holds promise for powering a wide range of applications as simple as wireless pushbutton switches to event loggers and more. In fact pulse-energy harvesting already lies at the heart of non-mechanical switches such as Schurter’s PSE series of piezo switches. With these devices, pressing a button deflects a piezoelectric disk, which creates a pulse of energy sufficient to power an electronic switch, which in turn momentarily closes the circuit across the switch’s terminals for the duration of the pulse (Figure 1). In this case, the period that the electronic-switch contact remains closed depends on the actuating speed, force, and duration.

When flexed or otherwise subject to mechanical strain, piezoelectric devices from manufacturers such as Mide Technology or Measurement Specialties can produce enough voltage output to power MOSFET or CMOS gates directly. For example, with the Measurement Specialties LDT0-028K, a 2 mm deflection is sufficient to generate about 7 V and greater bending can produce tens of volts (Figure 2).
Unlike other types of transducers, piezoelectric devices produce an AC-output voltage when they are bent back and forth. Consequently, designers will typically pass output from a piezo device through a bridge rectifier typically created from small-signal Schottky diode arrays such as the Rohm Semiconductor RB521ZS8A30TE61.

Specialized energy-harvesting devices such as the Linear Technology LTC3588-1 integrate this voltage conditioning functionality into a single chip. The Linear LTC3588-1 combines a low-loss, full-wave bridge rectifier with a high-efficiency buck converter needed to harvest energy from piezoelectric transducers and deliver a suitably regulated output to application circuitry. Designed to interface directly with a piezoelectric device or other AC-power sources, the LTC3588-1 rectifies the voltage waveform and stores harvested energy in an external storage capacitor (Figure

Depending on the nature of the pulse-energy source, applications powered by pulse-energy harvesting will likely have limited power available to provide extensive functionality beyond transmitting a data burst to some receiver. Indeed, engineers could be hard-pressed to implement more sophisticated wireless transmission protocols, requiring use of proprietary wireless methods with minimal communications overhead, resulting in shorter transmission bursts and correspondingly lower power requirements.