This was a behemoth of a project involving an inflatable costume, a LED costume, and a glove that controlled the colors and patterns of the LEDs. 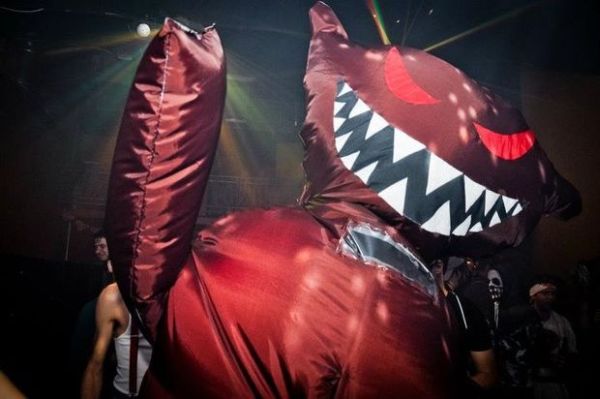 I’m a firm believer is sketching lots of ideas first.  After deciding what we are doing, we can start making!

The nylon to use is important.  I found that an impermeable nylon was more important than a lightweight nylon.  I went to the fabric store and tried to blow air through the nylon.  If air can’t go through, then it’s good. If air can’t go through, and it’s a light fabric that is better.  Parachutes are made of rip stop nylon or ballistic nylon, which I couldn’t find.  I guess if you can find this it would work better.

Step 2: Sketch and Cut Out Shapes

Sketch the shapes- I made different pieces for the head, body, legs, and arms.  Lay two layers of nylon flat, sketch out the shapes with chalk, and cut two identical pieces. Sew the pieces together with a French seam.

This photo is after I attached the head and one leg.  I blew it up with a hairdryer to test.  I started with the first half of a French seam until everything looked good.  I finished the french seam at the very end.

I used a magnet strip to make the closure airtight.  I assume an airtight zipper would work way better, but I couldn’t find one on quick notice.  The magnets weren’t very strong, so I added three clips to hold the closure together.  The magnets were just to keep the air from getting out.  This is in the very front of the costume.  I cut it open and glued the magnets inside.

I made a backpack out a hand vac, straps and some duck tape.  The vacuum sucks air from outside, and pumps it into the costume.  When being “birthed” I had to take it off quickly, so keep that in mind when making it.  I attached a tube to the end of the vac which connected to a plastic piece on the costume.   I also ducked taped this. 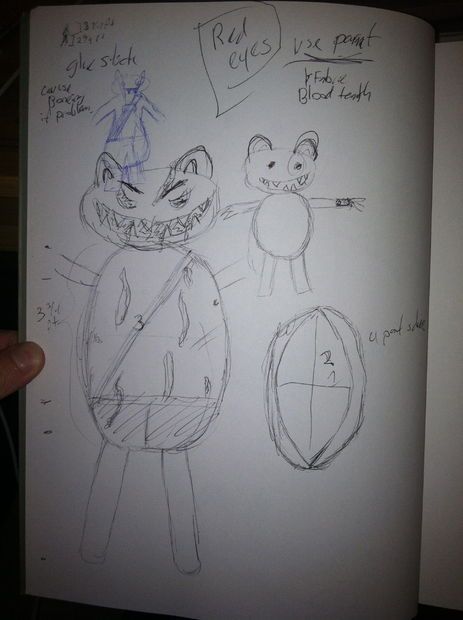 Photo is of me practicing being birthed.  I had to undo the clips holding the costume together, turn off and take off the vacuum, and undo the magnets. It took me a few times to do it quick.

Finishing touches!
I glued on light nylon fabric to decorate the face. I didn’t sew because I didn’t want to put more holes where air could get out. After realizing I couldn’t see anything, I sewed in a clear plastic window with black mesh behind it.  I also made his head smaller, his legs shorter, and added the arms.