An ambient, full colored, Arduino based Wall Light. The case is based on a cheap IKEA ceiling lamp. The color of the light can be changed through a simple serial bluetooth protocol.

This Project is fully open source and publicly released on github under the MIT License. Any further contribution to this project is highly appreciated

I started this project 2 days before we went to France for a 2 week holiday but since this is a really quick project the lamp worked fine after 2 days. Now when we came back I gave it the last touches and finished some bugs in the software. 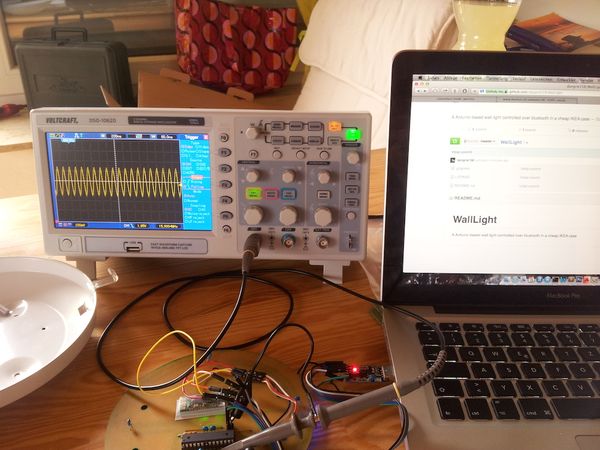 Initially this lamp should be a replacement for a lamp in our living room but I was way too greedy with the WS2812B LEDs. Eventually, the lamp wasn’t bright enough so I’m going to mount it now in the sleeping room as one of thosemorning, sun imitating lamps. As a controller I’m going to use a Raspberry PI with a node script that will also control some other devices in my house like my Wall Clock.

The case of this lamp is based on a really cheap (around 2€) IKEA ceiling lamp that I had lying around for a while. After cleaning off the dust and remove the high voltage socket I was really happy with the space that I had left and the diffusion of the glass.

The board is quite simple and was constructed in eagle. I still had an old board lying around with an MTMega 8 so I chose it as the main processor.

To reduce costs and complexity I’ve tried to only use one Layer and as less jumper wires as possible. I fitted the boards outline and drill holes to match the case of the IKEA lamp.

After several optimizations and double checking the pinout (would not be the first time that I accidentally Placed an IC upside Down on the board) the board was ready to be manufactured. Thanks to my CNC machine this process only took 20 Minutes.

Surprisingly everything went right the first time while milling and I was really happy with the outcome. Until now I always had to run the GCode a second time with a lower Z Axis.