Hands on with the Light Blue Bean

We took a look at Punch Through Design’s Light Blue Bean back when the board was called the “Cortado” and Punch Through had just opened its doors for pre-orders. However with the board now shipping to pre-order customers, and going on general sale at the end of the month, it’s time to take proper look at the final production hardware.

Punch Through was kind enough to send me four Beans for evaluation. The board I bought with my own money is apparently sitting on my desk back home, unfortunately I’m currently a few thousand miles away in New York for this year’s ITP Camp. 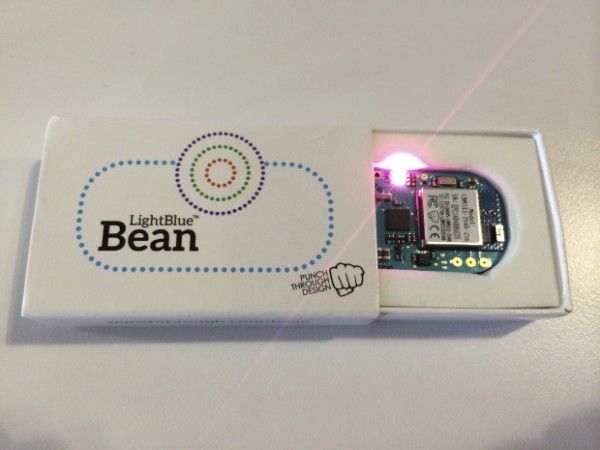 The Light Blue Bean is a new Arduino compatible board with built-in Bluetooth LE support, and while that isn’t a new idea, the Bean does something different than the other Bluetooth LE enabled Arduino clones I’ve seen so far—it lets you upload your code to the board wirelessly… look ‘ma, no wires!

Although the boards are supposed to ship with the battery in place so that—as long as you download their app to your phone ahead of time—you’ll get a push notification when the board arrives at your door, mine didn’t. When I opened the boxes there was a ‘remove before flight’ style plastic separator between the battery and the board. However I’m putting this down to the unorthodox method I obtained them rather than any change in policy.

So after pulling the ‘remove before flight’ tab I waited a couple of minutes, sure enough the Bean was discovered by the app and the promised local push notification turned up on my phone. Tapping on the notification opened the Light Blue app and allowed me to pick the Bean out of the list of nearby Bluetooth LE devices, which dropped me into a custom service view for the Bean.

The board has 8 digital I/O pins—2 of which can be used as analog inputs—an RGB LED, and a 3 axis accelerometer, and the app allowed me both to control the onboard RGB LED directly, and see the accelerometer values and the status of the digital and analog pins of the Bean.

For more detail: Hands on with the Light Blue Bean

Using a dual 7-segment display, a DS18B20 temperature sensor and a couple of shift registers I figured that I could...