Recently we have learned how to interface GSM Module with Arduino and send/receive SMS using GSM module. Interfacing any device with a micro controller is the first step to building a useful system or project with that particular device. 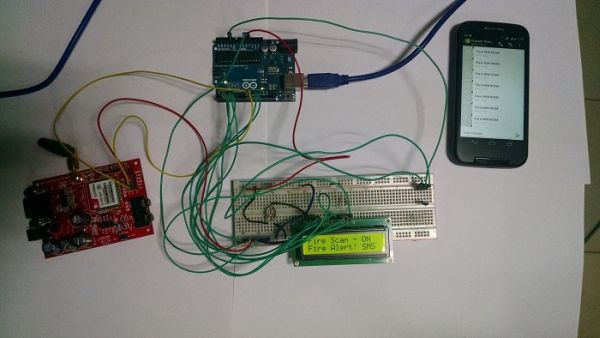 In this tutorial, we are going to build a very interesting project – a Fire Alarm System which will send SMS to a set of Mobile Numbers when fire occurs in a particular location. We have seen many typical Fire Alarm projects which will alert with a siren or an automatic shutdown mechanism. This fire alarm project make use of modern communication technologies to deal with emergencies.

1. SMS based Fire Alarm system are very useful in remote locations where human interaction is limited. Such systems are useful in mines, industrial areas, factories etc.

2. Night Owl – We all know owls don’t sleep during night. SMS based Fire Alarm system helps to monitor locations and alert during fire that occurs in night time.

3. Quick Actions to shut down Fire – 90% of fire damages occur due to lack of early fire detection. A fire attack is usually silent and people will know about fire only when it has spread across a large area. SMS based Fire Alert system gives warning immediately to multiple mobile numbers and hence remedy actions can be taken quickly. This helps to prevent major damages and losses created by a fire accident.

So lets get to the circuit & coding part!

Note 1:- I suppose you already know how to deal with temperature sensor LM35 and you know how to interface GSM Module with Arduino. Please read and learn those two articles before going ahead.

Note 2:- You may also read Digital ThermoMeter using Arduino which will help you learn more about LM35 and Arduino together.

So here is our program to monitor Fire Accident and to monitor the Shut Down Process (that should happen after a fire accident)!