Abstract: A PIN photodiode, four low-noise op amps and a comparator are used to detect individual photons of gamma radiation. The schematic, design considerations and component selection are discussed.
The circuit of Figure 1 includes a PIN photodiode that detects individual photons of gamma radiation. When a photon strikes a depletion region created by reverse bias on the photodiode, it produces a small amount of charge in proportion to the photon’s energy. The resulting signal is then amplified and filtered by four amplifiers and a final comparator distinguishes between the signal and noise. The comparator output pulses high each time a gamma photon with sufficient energy strikes the photodiode.

Small signal levels make this design an interesting challenge. It requires very low-noise circuitry, both because the amount of charge generated by individual gamma photons is extremely small, and because lowering the overall noise level allows the circuit to detect lower-energy gamma photons. Special attention must paid to the first stage, which is the most noise-critical. 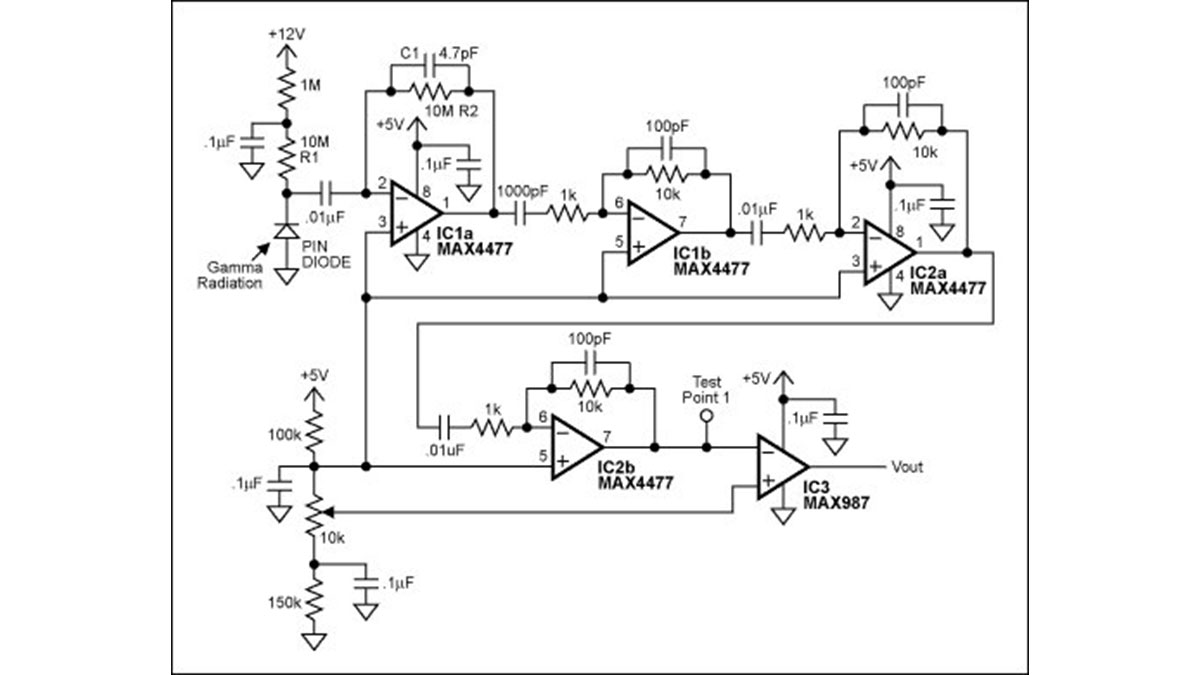 The most critical component is the PIN photodiode, whose selection often involves conflicting considerations. Detector sensitivity, for example (the number of photons detected for a given radiation field) depends on the size of the depletion region, which in turn depends on the area of the diode and the amount of reverse bias applied to it. To maximize sensitivity, therefore, you should choose a large-area detector with high reverse bias. But, both of those conditions add noise.

Large-area detectors tend to have higher capacitance, which increases the noise gain of the circuit. Similarly, a higher bias voltage means higher leakage current. Leakage current also generates noise. The Figure 1 circuit includes a PIN photodiode from Fairchild (QSE773). Though available and inexpensive, it is probably not optimal. Certain PIN photodiodes from Hamamatsu can work nicely in this application, however. Choosing a detector with 25pF to 50pF of capacitance under reverse bias provides a fair compromise between sensitivity and noise.

The op amp shown in this circuit (MAX4477) enables this design. It has negligible input-current noise and exceptionally low input-voltage noise: 3.5 to 4.5nV/RtHz at the critical frequencies of 10kHz to 200kHz. Its input capacitance is a respectably low 10pF.

R1 and R2 contribute equally to noise because they are directly in the signal path. Resistor current noise is inversely proportional to the square root of its resistance, so use as large a resistance value as the circuit can tolerate. Keep in mind, though, that leakage current from the PIN diode and first-stage op amp place a practical limit on how large the resistance can be. MAX4477 leakage current is only 150pA maximum, so R2 could be much larger than the 10MW shown. R1 can also be substantially larger when operating with a high-quality PIN photodiode.