Liquid Crystal Displays (LCDs) are a common and increasingly pervasive method of displaying information for everything from watches to giant TV screens. Though, like most other displays, LCDs require electrical energy to constantly display an image. Researchers from the Hong Kong University of Science and Technology, however, have produced an ultra-thin LCD screen prototype that is not only capable of displaying images without continuous power, but in 3D as well. 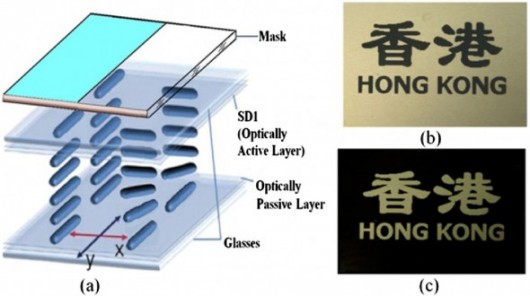 In a standard LCD, each pixel generally consists of a layer of molecules aligned between two transparent electrodes and a pair of polarizing filters. Passing current through the electrodes “untwists” the liquid crystal molecules and affects the way light interacts with them, be they a backlit display, like an LCD TV, or reflective, like a digital watch. Depending upon the orientation of that light, one of the polarizing filters will then make that pixel appear a certain color and form part of the overall display.

In the new display the electrodes have been completely removed, allowing a much thinner screen. An image is created on the screen using a flash of light. The flash passes through the polarized glass and aligns the liquid crystal molecules without the use of electrical energy, to reveal a picture. These crystals then remain aligned, holding the image in place, until another flash is applied to change it.

As a result, these optically rewritable LCDs (ORLCDs) only require power when the image flash is generated, so they may prove particularly useful in devices such as e-book readers where a static image is displayed for most of the time.

“Because the proposed LCD does not have any driving electronics, the fabrication is extremely simple,” said researcher Abhishek Srivastava. “The bi-stable feature provides a low power consumption display that can store an image for several years.”

As part of producing a visible image in an LCD is through the use of polarizing filters, the team added an extra ability to their prototype by using the properties of those filters to show images in 3D. As objects appear three-dimensional to our eyes from the perspective created between the separation of our two eyes, 3D mimicry generally requires two separate images taken from different angles and a pair of suitably polarized glasses to see.

The new ORLCD still requires the polarizing glasses to view an image in 3D, but the clever use of polarizing filters by the research team means that they only need the one image to create an illusion of 3D. By dividing the image into three separate zones – where in one the light is twisted 45 degrees to the left, another where it is rotated 45 degrees to the right, and a third in where it is left unchanged – light passing through a filter from the three zones is polarized in different directions, emulating the two images required for 3D simulation. Polarizing glasses can then be used to provide a different view to each eye, thereby simulating 3D.