The printer has been designed to use any photosensitive material to the laser wavelength (405nm) although the tests were performed with negative Dry-film (blue color). 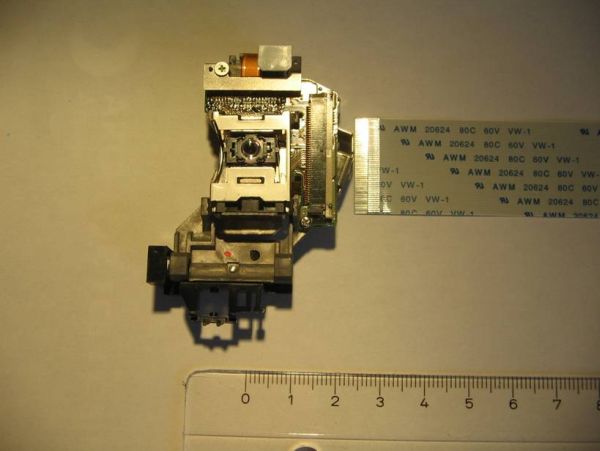 We used the famous Toshiba PHR-803T Blu-Ray™ pick-up (really it’s HD-DVD). We though we could use a Blu-Ray™ pickup laser diode to sensitize Dry-Film: a photoresist material very popular to print PCB’s. Dry-film is easy to use (adheres to the copper board through heat) and has a reasonable price ($15-$20 per m2). We have used it extensively with very good results.

The idea of using a Blu-Ray™ laser diode is not very original; we found some experiences of this type on the Internet, all based on removing the diode from the pickup and installing it on a CNC machine or a laser printer.

But we din’t want to tier down the PHR-803T because it is a jewel of engineering; we hate to destroy things (although finally we broke some of them to learn how they work). In addition, we wanted something as simple as buying the pickup and connect it to the printer. Fortunally the lack of PHR-803T technical information forced us hacking it. 🙂  And using reverse enginering we figured out the connector pinout and took advantage of the complete system: auto-focus, lens up and down, laser power, laser oscilator, etc, all through it’s own electronics.

We started the project in February 2013 but break on several times thinking that it was not feasible. Finally, in October 2013, we did all tests successfully. In total it have been about 8 months of work.

As we said later we wanted to build the printer without tier down or or re-use other ink printers or CNC machines. For this reason we designed everything from scratch. We thought that our PCB printer had to be low-cost, easy to build and “printable” with a 3D printer. We wanted to use an Arduino ONE for the electronics, although is very limited in terms of CPU speed and memory. We found on the web some experiences of people buiding CNC machines with it and the most important thing: there is open-source CNC firmware available that we could modify and adapt to build our printer. That gave us hope.

The software had to be also very easy to use. The idea was to use Eagle Cadsoft to design the circuits, then generate the files for printing the PCB’s and send them to the printer.

For more detail: DiyouPCB is a PCB printer which uses a Blu-Ray™ pickup