illustrates a digitally programmable precision resistance that can serve as a microprocessor-driven power-supply load in custom-designed ATE (automatic-test equipment). An 8-bit current-output DAC, IC1, a DAC08, drives current-to-voltage converter IC2A, which in turn drives the gate of power MOSFET Q1. The device under test connects to J1 and J2. In operation, current from the device under test develops a voltage across sampling resistors R8A and R8B. Amplifier IC2B drives IC1‘s reference input and closes the feedback path. Transistor Q2 provides overcurrent protection by diverting gate drive from Q1 when the voltage drop across R8A and R8B reaches Q2‘s VBE(ON). VO and IO represent the output voltage and current, respectively; N represents the decimal equivalent of the binary input applied to IC1; and A represents the gain of the amplifier stage IC2B. R1 comprises the parallel combination of R1A and R1B. Equation 1 describes the circuit’s load current: 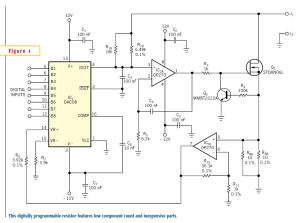 You can modify circuit values to cover other resistance ranges. Replacing the 8-bit DAC08 with a 10-bit D/A converter increases resistance resolution. To increase the circuit’s power-handling capability, replace Q1 with a higher power MOSFET and an appropriately sized heat dissipator. Capacitors C3 and C4 control the circuit’s bandwidth.