As most electronic engineers and hobbyists do, I have a great respect for the earlier ways of controlling electrons, before it was found out that silicon could be used to miniaturize everything a thousandfold. It is amazing that things like a vacuum, a glow wire and a bunch of strange-looking metal bits can actually do useful stuff. The amazing-ness of it all gets even better if there are visuals involved: while vacuum tubes only have the faint glow of the heater, tubes filled with neon are more interesting because they can be used to display stuff. Nixie tubes are a prime example of those.

A while ago, I was at a hackers convention and I saw someone having a little box with a neon spinny thing in it. I walked up to it and it turned out to be a dekatron tube, hooked up to a simple dekatron spinner circuit like this one. I talked to the guy who made it, and he told me he had a bunch of dekatrons at home and offered to send me one. 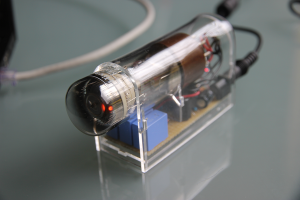 So a bit later I had this li’l puppy in my mailbox:

It’s a cute neon-filled Hivac GC10/4B dekatron counting tube. If I interpret the datecode correctly, this one is made sometime in the middle of 1969, meaning it’s 46 years old right now. It has a small imperfection in the glass at the top end, but apart from that it’s in pristine state.

So, what to do with this? Just making another dekatron spinner that would just go round and round at a constant speed sounded like a shame… why not let the thing actually display some interesting info? Of all the things I could measure, I thought it would be the nicest to combine the 1969-vintage decatron with one of the most recent utilities in the house: the Internet connection.