Sometimes you need to check one circuit and test some of its nodes. Usually a tester in voltage mode is a good solution, but it has a pair of problems. First, it measures about zero both when the node is driven at zero volts and when the node is floating (not driven at all). Second, it gives the information on the tester display, so you need to take the view from the circuit to the tester to check the voltage. 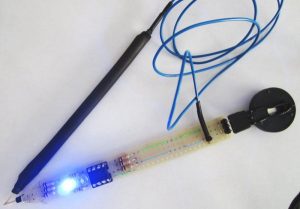 The proposed circuit somewhat qualifies as a logic probe. It should give no indication when the node is not being driven and it should give a different indication when the node is driven at high or a low voltage.
A lot of logic probes are not self powered. They rely on the circuit supply to operate. In my case I would like the probe to be usable also a as a continuity tester. If we set ground in one point of the circuit and we probe another point, the continuity can be detected between both points because a low level will be driven even if the circuit is not powered at all.

In the end, the circuit puts a 1.5V voltage on the probe tip, provided by the two 100k resistors, so it behaves like a 1.5V source with a 50k series resistance. If the probe voltage is kept between 1V and 2V, no LED is lit. If the probe voltage is below 1V, the blue LED turns ON. And if the probe voltage is above 2V, the white LED will turn ON.
When you probe a node in the circuit, you can sense its voltage using a high impedance voltmeter. That will give you the open circuit voltage (Voc). This voltage can be driven with different strengths. The drive strength is related to the equivalent resistance at the node. For a linear non reactive circuit it will be the equivalent Thevenin resistance. In the end, the equivalent circuit will be something like that:
Read more: Building a simple Circuit Probe
Share this:
READ  antiAFK – Sending random keyboard commands

Ever wanted to build a Face Tracking Robotic Arm or Robot by simply using Arduino and not any other programming...