Toner Transfer Method.. is no doubt sheer Awesomeness. With just a few steps you can have your prototype in your hands without waiting for weeks for the fab house to deliver. Certainly relieves me of a lot of anxiety. I even made this Open Agitator a while back to help me ease out the etching process. 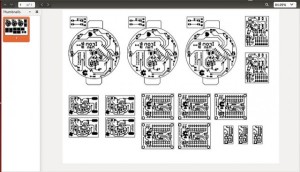 I usually (used to) print my designs on the glossy photopaper near my college where there is a usual hub of shops catering to student needs. Carrying the photopapers from my house to the college in the crowded metro would often crumble them. I preferred buying them from the local stationary shops near the college itself who would sell it at varying prices anachronistically.

The shop used to charge for a round of paper into the printer (actually one print) and if i printed multiple on the same sheet, if was charged more. As students we should cut costs. Further the several-times-on-a-page approach had more issues:

Thats too much work specially after waiting in a queue to get to the printer !

I actually never thought of getting out of this circle for a while until the last few semesters, which were less academically demanding. I then wrote a small python script to combine all the pages that i used to print seperately to a Single page and then go and just print one pdf. No worries about messing up the orientation/scaling etc..