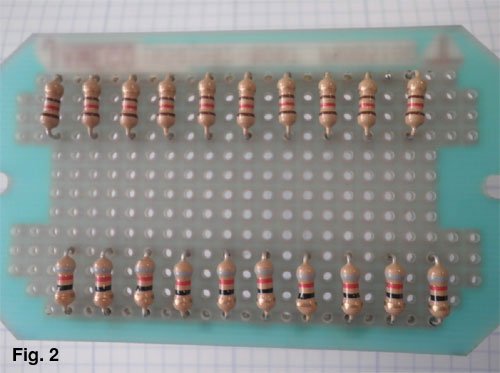 Note: This project is for fun, and should not be used on any vehicle used on public roads. In most states, impersonating an officer or having red, blue, or white flashing lights on your car is illegal. You have been warned!

I had an overall vision for this project before I started and ran into a few part placement issues during my build. I ended up modifying some parts halfway through the project, so I would recommend familiarizing yourself with the project before starting. First, I built the remote module. This kit will require an Arduino microcontroller but is not included in this kit. If you need one, I used the Duemilanove, which has since been replaced by the functionally-similar Uno R3 (Jameco P/N 2151486).

I started with the smaller PCB since I knew space was going to be an issue. RGB LEDs would have been nice because it would require less space, but this design uses both red and blue LEDs. The first step is to bend the resistors and mount them starting from the edge of the PCB. You will use one resistor per LED per color, so you will need ten 82Ω resistor (Jameco P/N 690603) and ten 120Ω resistors (Jameco P/N 690646). The idea here is the power will distribute through both edges of the PCB, through each resistor, then to its connected LED, then ground, where all ground leads from the LEDs will be joined to create one main ground lead.

Place the resistors through the holes starting from the outer edge and ending in the middle. I also mounted a couple transistors and 2-position terminal blocks, so I had to plan the hole usage accordingly. Start with the PCB (105100) solder-side down with the part number at the bottom. Insert the first 120Ω resistor into the bottom row and second hole from the right. (see Fig. 1) It should be the first row that goes from end to end. The other end of the resistor should go in the same column but the third hole up. The resistor should only take up four holes. Insert the other nine 120Ω resistors in the same manner, starting from the bottom row and making sure to skip a column to spread the resistors out. For the 82Ω resistors, mount them the same way as the last ten resistors but start from the other side (top row) and stagger them so they are directly across from blank spaces at the other side. See figure 2 below for example.

Solder the resistors, but don’t cut off the leads yet. The two edge rows of the PCB where the resistors start will be the power rails. When you turn the board over, the very first resistor that was mounted is now on the left. Starting with that first resistor lead, bend it over the other resistor leads in the same row so that it’s flat and makes contact with the other leads. Solder the bent lead to the other resistor leads it contacts. You will have to bend a couple more to connect the ten resistors as a common rail. See figure 3. The idea is to have the row completely connected. After the row is all soldered together, leave the right-most lead alone for later use and cut the extra off the soldered connections.

Situating the LEDs was the tricky part. See figure 4 for a close-up.

It is easiest to mount and solder one LED at a time so you can be sure the mounting height is consistent. Plus, you don’t want the other LEDs to crowd your work area. Start with thered LEDs (Jameco P/N 2095171) and work from left to right. Insert the anode (longer lead) into the hole just above the leftmost 120resistor and the cathode (shorter lead) into the hole next to it at the outer edge of the PCB. I wanted the LED to sit a little bit up off the board so that when the PCB was mounted into the enclosure box, the LED surface would be flush with the surface of the box. I used some tape to hold the LED at the desired height and then soldered it into place. The next LED would have to be staggered and installed in the same fashion as the first LED, but one row above the previous row. The anode went in the same column as the resistor, and the cathode in the blank column. Install the third LED the same way as the first, but in the first row. You will see how the LEDs are fitting snugly next to each other with each anode lining up with a resistor, and each cathode lining up to an empty column. See figure 5.

After all the red LEDs are installed, working from the solder side, bend each anode of the LEDs over to contact a resistor lead. I chose the LED lead because it is sturdier than the resistor leads. Each anode can be soldered to an individual resistor and clip off the extra. I would recommend clipping off the extra after testing to make sure everything is properly configured. The negative lead of the LEDs will be bent in such a way that the leads closer to the center of the PCB will all be bent toward one side to form a rail, and the remainder will be bent toward the center to contact that newly formed rail. It should be every other lead because of the way the LEDs were staggered. Be sure to make the ground rail high enough so it doesn’t short out on any other component. Once the leads are bent, the extra length of lead over the ground rail can be cut off. Solder all cathode lead contact points to form one common ground lead. Do this for each color, and each finished ground lead will be facing opposite sides of the board.

For the blue LEDs (Jameco P/N 183222), they will be installed in the same staggered pattern as the red LEDs. If you are looking at the board from the component side, the next set of LEDs will be installed so there are two blank holes between the red and the blue LEDs. Every other LED’s anode will be right below a resistor, while the other half will be installed one row below the other LEDs. The up and down pattern should look just like the red LEDs. The anode of the blue LEDs can be bent over to contact a resistor and soldered at that point, then cut the excess. Bend the cathode in the same manner as you did with the red to form a common ground lead. Looking at the board from the solder side, where the red common ground was constructed to point toward the left side, the blue ground leads will be bent to form a common ground lead that points to the right side. Both of these common grounds will connect to a transistor at either side of the board. 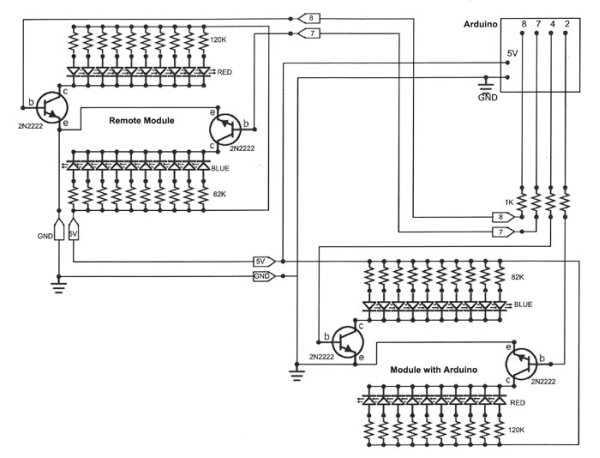 After all of the LEDs on the module were wired together, I decided to test them to make sure they all worked. To be truthful, I learned to solder just before starting this project, so my technique was lacking, and I was unsure all the solder joints were solid. I used my multimeter to test for continuity through each resistor, but I could have also applied 5V to the power rail and connected the ground to make sure they all lit up. Lucky for me they did, and by this time, my solder skills had vastly improved.