The trend in automobiles and industrial systems is to replace mechanical functions with electronics, thus multiplying the number of microcontrollers, signal processors, sensors, and other electronic devices throughout. The issue is that 24V truck electrical systems and industrial equipment use relatively high voltages for motors and solenoids while the microcontrollers and other electronics require much lower voltages. As a result, there is a clear need for compact, high efficiency step-down converters that can produce very low voltages from the high input voltages. 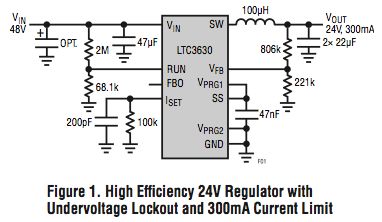 65V Input, 500mA DC/DC Converter with an Adjustable Output Down to 800mV

The LTC3630 is a versatile Burst Mode synchronous step-down DC/DC converter that includes three pin-selectable preset output voltages.Alternatively, the output can be set via feedback resistors down to 800mV. An adjustable output or input current limit from 50mA to 500mA can be set via a single resistor. The hysteretic nature of this topology provides inherent short-circuit protection. Higher output currents are possible by paralleling multiple LTC3630s together and connecting the FBO of the master device to the VFB pin of a slave device. An adjustable soft-start is included. A precision RUN pin threshold voltage can be used for an undervoltage lockout function.

Figure 1 shows a 48V to 24V application that showcases several of the LTC3630’s features, including the undervoltage lockout and output current limit. Operational efficiencies are shown in Figure 2.The RUN pin is programmed for VIN undervoltage lockout threshold levels of 27V rising and 24V falling. Figure 3 shows VOUT vs. VIN. This feature assures that VOUT is in regulation only when sufficient input voltage is available.

I will show you how to build a bike speedometer. It shows your speed, the average speed,the temperature, the trip...