This waveform generator is based on the work by Amanda Ghassaei. Waveform generators (or function generators) are used for testing and debugging circuits. e.g. frequency response of op amp or sensors. This waveform generator is powered by Arduino with Annikken Andee shield – a device that lets users create iOS/Android interfaces without iOS or Android programming at all. It outputs sine, triangle, saw and square waves. Frequency is controlled by means of a slider (on iOS/Android device) and wave type is selected using on screen iOS/Android button. With a iOS/Android interface, you can add certain features not possible with hardware buttons. E.g. displaying different ranges of frequencies for each wave type, displaying meaningful controls for certain wave types. For example, the pulse width modulation slider is only visible for square wave types, its not visible for sine, triangle or saw wave forms. 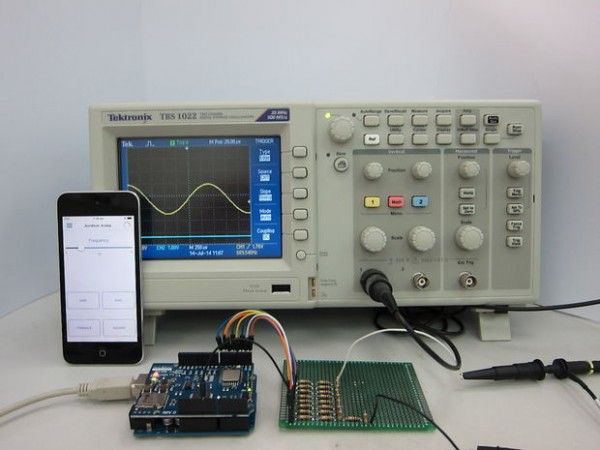 Build a R2R DAC using the schematic provided. Note that all the resistors used are 10Kohm.

My setup here does not include the following:

However, its enough to show a waveform on the oscilloscope.

Connect Annikken Andee to Arduino by simply plugging it on top as a shield.

How to control LED’s with Processing and Arduino

The other day I was confronted with an interesting problem, I needed to control a series of lights from an interaction...