Battery Recharging… One Lump or Two?

BLACKSBURG, Va., Jan. 22, 2014 – A Virginia Tech research team has developed a battery that runs on sugar and has an unmatched energy density, a development that could replace conventional batteries with ones that are cheaper, refillable, and biodegradable. 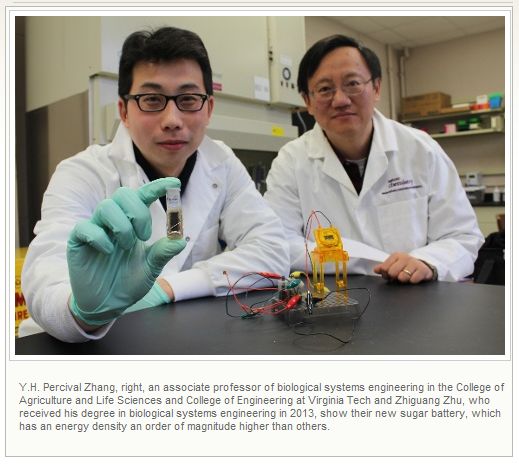 The findings from Y.H. Percival Zhang, an associate professor of  biological systems engineering in the College of Agriculture and Life Sciences and the College of Engineering, were published yesterday in the journal Nature Communications.

While other sugar batteries have been developed, Zhang said his has an energy density an order of magnitude higher than others, allowing it to run longer before needing to be refueled.

In as soon as three years, Zhang’s new battery could be running some of the cell phones, tablets, video games, and the myriad other electronic gadgets that require power in our energy-hungry world, Zhang said.

“Sugar is a perfect energy storage compound in nature,” Zhang said. “So it’s only logical that we try to harness this natural power in an environmentally friendly way to produce a battery.”

In America alone, billions of toxic batteries are thrown away every year, posing a threat to both the environment and human health, according to the Environmental Protection Agency. Zhang’s development could help keep hundreds of thousands of tons of batteries from ending up in landfills.

This is one of Zhang’s many successes in the last year that utilize a series of enzymes mixed together in combinations not found in nature. He has published articles on creating edible starch from non-food plants and developed a new way to extract hydrogen in an economical and environmentally friendly way that can be used to power vehicles.

In this newest development, Zhang and his colleagues constructed a non-natural synthetic enzymatic pathway that strips all charge potentials from the sugar to generate electricity in an enzymatic fuel cell. Then, low-cost biocatalyst enzymes are used as catalysts instead of costly platinum, which is typically used in conventional batteries.

Like all fuel cells, the sugar battery combines fuel — in this case, maltodextrin, a polysaccharide made from partial hydrolysis of starch — with air to generate electricity and water as the main byproducts.

“We are releasing all electron charges stored in the sugar solution slowly step-by-step by using an enzyme cascade,” Zhang said.

For more detail: Battery Recharging… One Lump or Two?