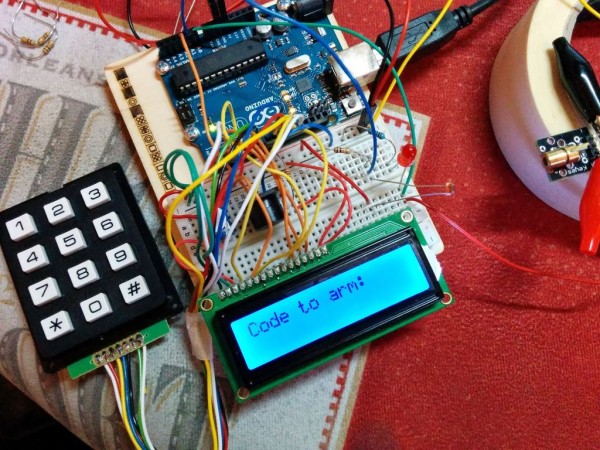 So, first thing I did was to get the LCD and keypad working together.

For this I pretended that it was some sort of arm/disarm (or entry/exit) thing.

My code for this part is at: http://pastebin.com/YndLneqm.

Getting the LCD wired up was tricky as most wiring diagrams for it don’t show the last two pins wired up and these are required for the back light. Check my snazzy Fritzing wiring diagram to see how I wired up my LCD screen, pot (for adjusting brightness) and keypad. The pins for them all are also mentioned in my code.

NOTE: pin 1 isn’t used as whenever I wired something to pin 1 I experienced weirdness. Not sure why. I expect it’s something to do with the pins data uses?

If you don’t have the keypad.h library you’ll need to grab it from here: http://playground.arduino.cc/code/Keypad

I’ve added to it using a simple IF/ELSE statement to do one of two things.

I’ve added an LED and an integer called ‘armed’. Initially ‘armed’ equals zero, and ‘armedLed’ equals A0. I’m now having to tweak the rules and use the analog pins for digital components as I’m quickly running out of pins!

Basically here’s what’s happening: if the password is correct and armed=0 (in other words: the system is off) then it will clear the screen, display ARMED!, change armed to equal 1 and light the red LED. Finally it will display “Code to disarm:”. Otherwise, armed must equal 1 (system is on) so display DISARMED!, make armed=0 and display “Code to arm:”.

After getting success with armed/disarmed I went and dug out a laser sensor from my cheapo 37-in-1 sensor box and a photoresistor (a Light Dependent Resistor, LDR for short). The LDR goes to A1 with a 220 ohm resistor with one leg and taking its other leg to ground. The laser sensor goes to the positive LED leg and to ground. Now, when the system is armed the laser flicks on and is made to point at the LDR.