A crowdfunding campaign on IndieGoGo for Nybble, described as the “World’s Cutest Open Source Robotic Kitten”, has already achieved 95% of its $50,000 goal and there’s over 3 weeks left for it to increase its pre-release sales.

So what is Nybble and why would you want one? This video, made for its Indiegogo campaign reveals that it’s a fun robotic pet for kids as well as an affordable way in to robotics:

The Early Bird special – a Nybble Kit for $175 with estimated delivery in December 2018 has already sold out, but you can still reserve one for $200 plus shipping to be delivered in April 2019. 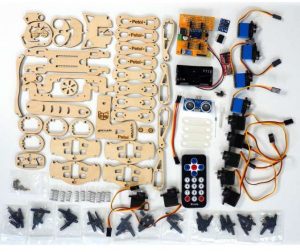 For $45 plus shipping you can also reserve just a NyBoard, the Arduino compatible motion controller that Nybble is built around and use it to build a different type of creature. The NyBoard uses a ATmega328P chip, the same as that on the Arduino Uno. It allows hackers to add a Raspberry Pi or another extension board to extend Nybble’s capabilities. In terms of software Nybble relies on the OpenCat framework.

We first came across OpenCat in February when its creator Rongzhong Li put the project on Hackster.io and on the Arduino Project Hub. We had reservations that, despite its name, the project wasn’t open source. Recently an MIT licence has been added to code on its GitHub repo. While Nybble is being sold as a commercial product, albeit a kit of parts, its code is freely available.

The OpenCat project, intended to be educational and to make robotics accessible and affordable. Nybble, with its Indiegogo campaign to provide the funding necessary to gain certification for the NyBoard and start mass producing kits, appears to be fulfilling this aim. This timeline of the project indicates that progress towards it has indeed been pretty rapid.

Robots and kittens – the combination has to be irresistible. We wish Petoi success in this venture and I know what I want for xmas…

Arduino Kits can be merged with the Arduino Ethernet module is based on the materials used in the design of...