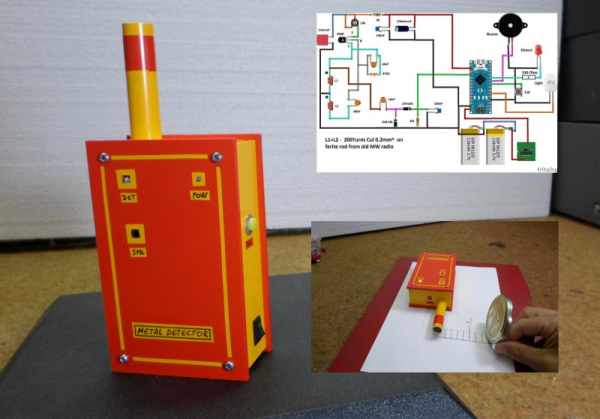 Full-size metal detectors are great for narrowing down a region to start digging through. But what if you had a smaller metal detector that could pinpoint the location? Then you could spend far less time digging and way more time sweeping for metal.

Metal detectors work because of the way metal behaves around electromagnetic fields. [mircemk] reused the ferrite core from an old MW radio to build the antenna coils. When metal objects are close enough, the induced electromagnetism changes the frequency, and the Arduino blinks an LED and beeps a buzzer in time with the new frequency.

[mircemk]’s handheld metal detector is quite sensitive, especially to smaller objects. As you can see in the demo video after the break, it can sense coins from about 4cm away, larger objects like lids from about 7 cm, and tiny things like needles from a few millimeters away. There’s also an LED for treasure hunting in low light.

Don’t want to pinpoint a bunch of useless junk? Build in some phase detection to help you discriminate.

TURNING A DESK DRAWER INTO A FLIGHT YOKE

[Christofer Hiitti] found himself with the latest Microsoft Flight Simulator on his PC, but the joystick he ordered was still...