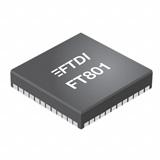 FT801 brings together advantages of the „Embedded Video Engine“ (EVE) concept and advantages of capacitive displays like easy control, interactivity and usually a higher brightness and overall vividness of these displays.

New chip FT801 is functionally practically the same as the initial EVE chip – FT800. It supports display, audio and touch interface with a capacitive touch screen via an I²C interface connected to a standard touch controller.

FT801 has multi-touch capabilities enabling 5 independent touch points to be simultaneously determined (so called Extended mode). This facilitates the deployment of human machine interfaces (HMIs) usable by several people at once, or where a variety of complex hand gestures can be detected. The IC’s sophisticated hardware engine has the ability to recognize touch tags and track touch movement – delivering notification of up to 255 touch tags

For more detail: FT801 if you prefer capacity rather than resistivity