Skip to content
I needed a project that would use all my servos, so I decided to make the do-nothing, worthless spider. If you have fischertechnik and servos to waste, this is the project for you! Really, this flopping spider makes for a great learning project. The main goal of this project is to teach the fundamentals of servos, synchronizing them, programming them, and understand the range and strength of servos. The results are very amusing!

Fischertechnik? What’s that?
Legos have bricks, K’NEX has blue and yellow connector rods, but what does fischertechnik have? In truth, it has way too many pieces to give names to! Fischertechnik is definately not as popular as legos or K’NEX, but I like it much better. It’s very good for exercising building and construction skills. Here is an excerpt from Wikipedia on fischertechnik
“Fischertechnik is a brand of construction toy. It was invented by Artur Fischer and is produced by fischertechnik GmbH in Waldachtal, Germany. Fans often refer to Fischertechnik as FT or ft. It is used in education for teaching about simple machines, as well as motorization and mechanisms. The company also offers computer interface technology which can be used to teach the theory of automation and robotics.”
I will be calling fischertechnik FT as mentioned above.

Here’s a video of it walking. 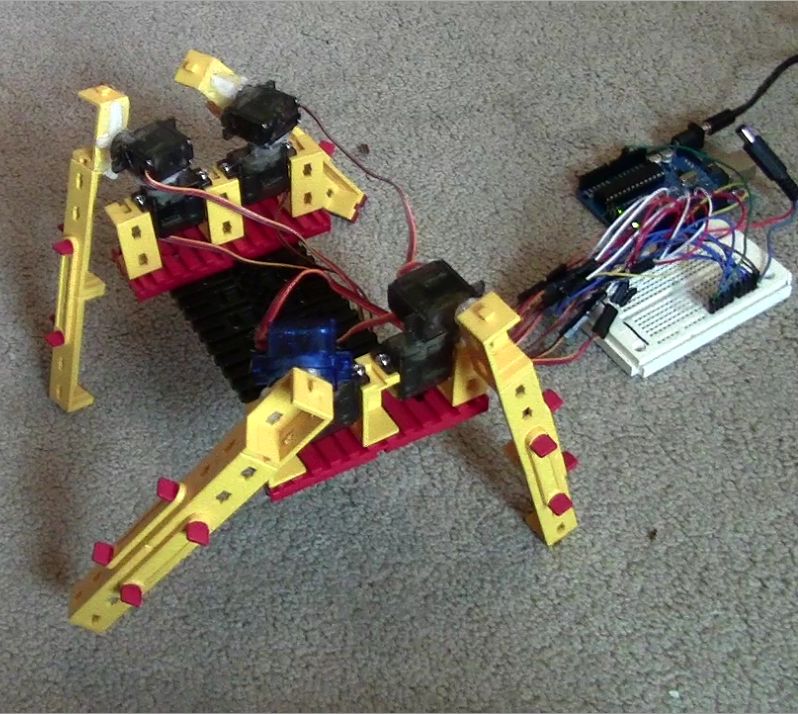 Since I don’t know what to call the FT pieces, I’ll just show the pictures to building the frame. Make sure to look at the captions.
Assuming you have fischertechnik, you can just tell what pieces I’m using to build this. I’m sorry I can’t offer much more of and explanation!

Now get out your dremel! The servos conveniently fit between the ‘bricks’. Drill a small pilot hole, then using the screws the servo came with, screw them in. If you don’t want to screw into you pieces, that OK, just use some hot glue, but, it’s always easier disassemble if you use screws. Note: You will want to screw these on BEFORE you put on the arms, or else the arm will be in the way of your screw making it difficult. And why do I know this? I’ll let you guess =) Repeat this on the other side.

Step 4: Mounting the Servos on Servos

You will first need to screw on the circular servo attachment. If the servo is facing away from you, turn it all the way to the right. See pictures.

Now the circular servo arm is different from the other arms; the screw sticks up above the plastic unlike the other ones, which the screw head sinks below the plastic. So, with  this bump in the middle, a flat surface cannot be mounted totally flat, instead it will wobble and pivot around the center. To fix this, I’m taking a 7/32 bit (one size smaller than 1/4 on a standard drill set) and drilling a small indent on the servo that will be glued on top of the base servo. See pictures. Then using hot glue, glue the two servos together.

This part is little tricky. I’m going to put a little video up to kinda help you understand how to mount the arms. See the pictures how to make the arms. You will need four of these.  See the video in step 4 for glueing these on. 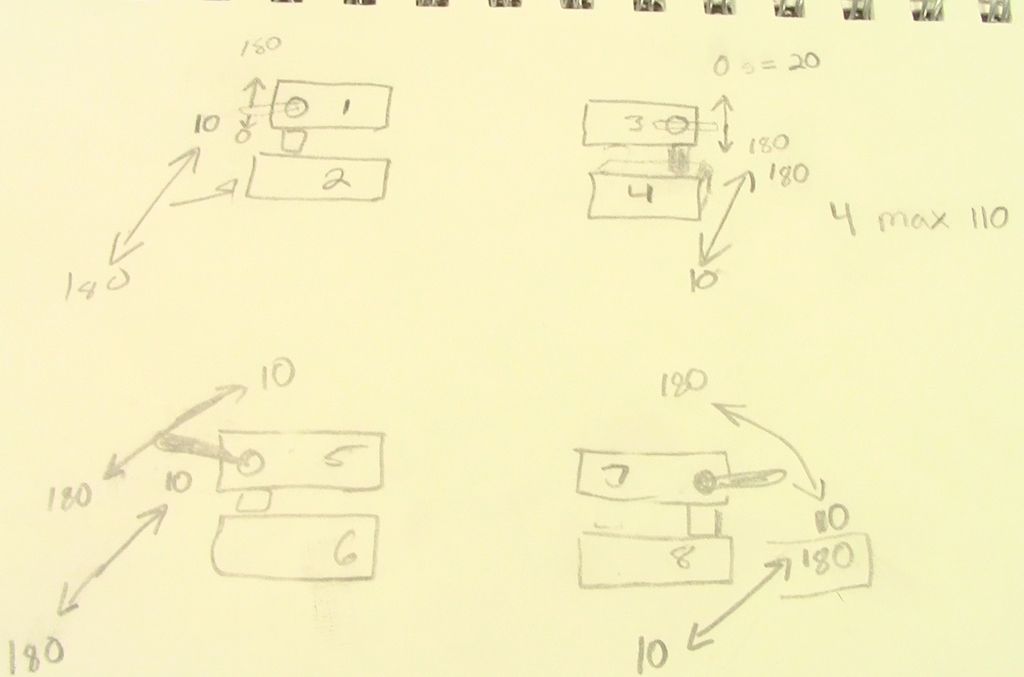 Step 6: Seeing it all Together

After you mounted all the arms you will want to check them for full range of motion.

Step 7: Creating a Diagram For Reference

Now, this is the most helpful step of all. Create a diagram like the one shown in the picture, and figure out for each servo which way is 180 deg. and which is 0 deg.. Then number all the servos. These numbers are what you will be using in your Arduino program.