A reference board design developed by Future Electronics is intended to support the development of audio functions in industrial products such as security equipment and public access systems. 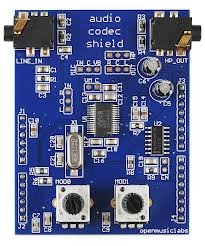 The WM8593 outputs three stereo audio channels at line levels up to 2Vrms, which can be selected from any of the analogue inputs and DAC outputs. Additionally, one stereo output is available with a headphone driver. The DAC channels include independent digital volume control, and all three stereo output channels include analogue volume control with soft ramp. The WM8593 supports up to 2Vrms analogue inputs, 2Vrms outputs, with sample rates from 32kHz to 192kHz on the DACs, and 32kHz to 96kHz on the ADC. The WM8593 is controlled via a serial interface with support for 2-wire and 3-wire control with full readback. Control of mute, powerdown and reset can also be achieved by pin selection. The WM8593 is ideal for audio applications requiring high performance and flexible routing options, including flat panel digital TV and DVD recorder. The WM8593 is available in a 64-lead TQFP package.

For moe detail: Ref design Future’s audio is based on Wolfson codec

Ref design Future’s audio is based on Wolfson codec