In a recent instructable Indigod0g described a mini weather station that works pretty well, using two Arduinos. Maybe not everyone wants to sacrifice 2 Arduinos to get humidity and temperature readings and I commented that it should be possible to do a similar function with two Attiny85’s. I guess talk is easy, so I better put my money where my mouth is.

In fact, if I combine two earlier instructables I wrote:

2-Wire LCD interface for Arduino or Attiny
and
Receiving and sending data between Attiny85 (Arduino IDE 1.06)
then most of the work is already done. Only need to adapt the software a bit. 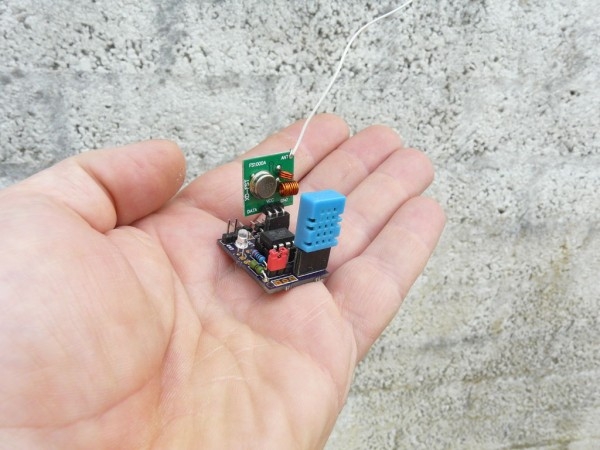 I chose for a two wire lcd solution with a shift register, rather than an I2C LCD because on the Attiny the shift register is easier to implement than the I2C bus. However… if you for instance want to read a BMP180 or BMP085 pressure sensor, you need I2C for that anyway so you might as well use an I2C LCD then too. TinyWireM is a good library for I2C on an Attiny (but it requires extra space).

The transmitter is a very basic configuration of the Attiny85 with a pull up resistor on the reset line.
A transmitter module is attached to digital pin ‘0’ and the DHT11 data pin attaches to digital pin 4.
Attach a wire of 17.2 cm as antenna.
The software is as follows:

The software uses Manchester code to send the data.
It reads the DHT11 and stores the temperature and humidity in 2 separate floats. As the Manchester code doesnt send floats, but an integer, I have several options:
1- split the floats into two integers each and send those
2- send each float as an integer
3- send the two floats as one integer

With option 1 I need to combine the integers into floats again in the receiver and I have to identify which integer is what, making the code long winded
With option 2 I still need to identify which integer is for humidity and which for temperature. I cannot go by sequence alone in case one integer is lost in transmission, so I would need to send an identifier attached to the integer.
With option 3, I can send just one integer. Obviously this makes the readings a bit less accurate – within 1 degree- and one cannot send below zero temperatures, but it is just a simple code and there are ways around that. For now it is just about the principle.

So what I do is I turn the floats into integers and I multiply the humidity with 100. Then I add the temperature to the multiplied humidity.
Given the fact that the humidity will never be 100% the max number I will get is 9900. Given the fact that the temperature will also not be above 100 degrees, the max number will be 99, therefore the highest number i will send is 9999 and that is easy to separate at the receiver side.

Ofcourse my calculation in which i use 3 integers is overkill as it could easily be done with 1 variable. I just wanted to make the code easier to follow.

the code now compiles as:

Have you wanted to make a sweet Cylon/Knight Rider (Larson) Scanner effect? But you don’t want to use up all...